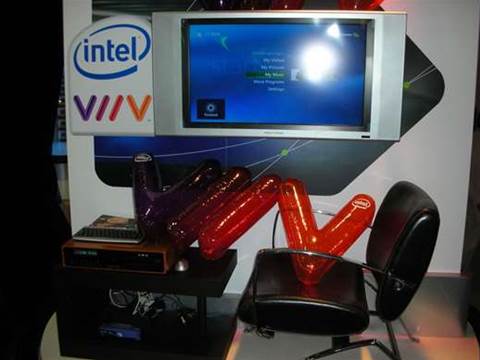 Intel is talking up the importance of media adapters as a way of extending the appeal of its Viiv entertainment platform.

The company expects a series of adapters to be launched in the coming months that will allow Viiv devices to better connect with 'legacy' TVs.

Intel delivered a software update earlier this month that installed a media server on Viiv systems.

Viiv PCs are connected to a high-definition television or PC monitor, but the majority of consumers want to access their media through a regular television, Intel chief executive Paul Otellini said in a keynote at the Intel Developer Forum in San Francisco.

"We have to work with the industry to enable a series of devices that allows this to happen in legacy televisions," he told delegates. "People are not going to buy a new television just to take advantage of this."

Netgear was the first manufacturer to come out with a Viiv certified adapter. The device is priced at US$250. Other vendors including Linksys, D-Link and Acer are expected to follow in the coming weeks.

The lack of adapters is a major issue in today's Viiv offering, Gartner research vice president Steve Kleynhans told vnunet.com last week. He claimed that the absence of such devices played a major role in Viiv's limited appeal to consumers.

In his opening keynote, Otellini showed off a recorder from US satellite provider DirectTV scheduled to start shipping later this year. It allows users to access digital photos, music and videos on their television sets.

Got a news tip for our journalists? Share it with us anonymously here.
Copyright ©v3.co.uk
Tags:
adapters hardware in intel on push switches tv viiv