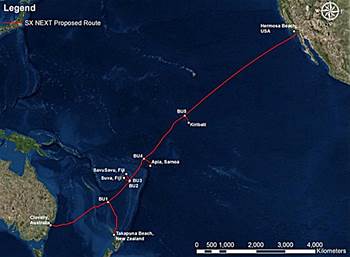 A new submarine cable, the first to take traffic directly between Australia and the USA, is to be commissioned in July.

Southern Cross NEXT will more than quadruple the bandwidth the multi-carrier cable operator offers, adding 72Tbps to the 20Tbps the organisation currently supports, in a single span cross the Pacific.

The cable runs from the Clovelly cable landing station in Sydney to Los Angeles and will give carriers lower latency connections between Australia and the US.

Branching units long the way connect New Zealand, Fiji (to the islands of Suva and Savusavu), Kiribati and Tokelau (providing the last two islands with their first fibre connection to the outside world).

As the third cable in the Southern Cross network, the 15,857 km SX NEXT will also provide extra redundancy on the route.

“With the rise of cloud-based services and hybrid remote working models, connectivity with diversity and reliability is more critical than ever to ensure constant uptime and uninterrupted services," Telstra International CEO Oliver Camplin-Warner said in a statement.

“The SX NEXT cable will strengthen Telstra’s existing subsea network infrastructure – one of the largest in the Asia-Pacific region – and solidify our commitment to connecting people and communities from Australia and the Pacific Islands to the US and around the world.”