Border Force is developing technology to scan cargo at ports 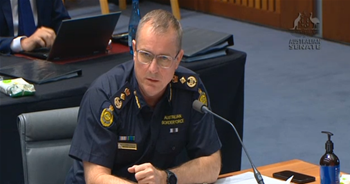 Australian Border Force is developing technology to screen all containers at ports instead of removing samples for external inspection that causes delays.

ABF commissioner Michael Outram told senate estimates this is the department’s “long term vision,” in response to a question from Liberal senator Paul Scarr about what ABF has done to make it “as easy as possible for legitimate businesses to go through the trade process".

The inbound freight industry has said in the past that ABF removing cargo to external container examination facilities for inspection causes a large backlog.

Complaints from the Customs Brokers and Freight Forwarders Council of Australia prompted the Commonwealth Ombudsman to commence an “Investigation into delays in processing inbound containerised sea cargo” in 2018.

“The investigation identified the major reason for these delays was the reduced operational capacity at CEFs [container examination facilities] during peak times," it found, recommending ABF “consider upgrading the smaller CEFs to include larger x-ray technology.”

“I'd much rather in the future use vision to screen those containers at the wharf without the need to actually move them anywhere,” Outram told senate estimates yesterday.

“We can only screen, for example, a handful of containers through our examination facilities by way of X-ray, because of the volumes and because of the logistical exercise of bringing those containers from a wharf.

“So in other words, [we'd screen containers] potentially as they come off a vessel. Now that's a long way into the future.

"But the trials we're doing now, they're very much building towards that view of the future where we have algorithms driving us new technologies that are networked, that are AI [and] self-learning

“And of course, that we’re were screening far higher volumes of things coming into the country.”

The commissioner also said the department is engaging with the transport and freight industry more proactively to ensure that wharves, airports and mail sorting facilities are designed to be compatible with the department’s compliance processes and technologies.

“If there's a new wharf being built, a new airport being built, a new mail sortation facility being built, it allows us then to co-design with that particular industry their actual systems, processes and technologies and see if we can integrate ours securely with those, rather than bolting on our regulatory requirements," Outram said.

The 2021 budget included $37 million to be spent over three years to modernise Australia’s trade system and review its regulatory processes and IT systems that impact cross-border trade.