Aussie Broadband calls on IoT vendors to catch up with IPv6 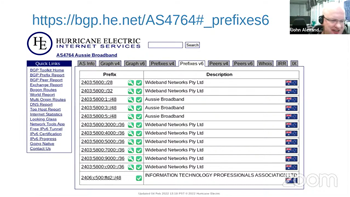 Netflix over IPv6 on your laptop, IPv4 on your "smart" TV.

Aussie Broadband’s network engineer John Alexander has criticised vendors, particularly in the Internet of Things space, for being way too slow to support IPv6 in their products.

Alexander, who has been overseeing Aussie Broadband’s IPv6 rollout since 2009, made the remarks to the Apricot 2022 Apnic 53 conference.

Since its initial experiments, Aussie Broadband has gone from alpha in the years before 2018, to today when it can offer IPv6 addresses to all its customers.

However, Alexander said, operators still have to maintain scarce and expensive IPv4 resources - because even though a customer may have IPv6 enabled on their router and computers, other devices can only support v4.

“It is disappointing”, he told the conference. “On a desktop if you have v6 and you stream Netflix that will come over v6, or YouTube, over v6.

“But TVs don’t have v6 - if you’re watching Netflix on a TV, that will revert to v4.

“We need the Internet of Things, TVs or any other devices, to be able to support IPv6 or we’ll be stuck in IPv4 land.”

Router vendors didn’t escape Alexander’s criticism either. Aussie Broadband worked with its two main retail router vendors to get IPv6 working and enabled by default, but the company also has to work with BYO devices, where things are less advanced.

He told the conference another Aussie Broadband engineer, Mark Smith, has been working with vendors since his previous employer, and has seen various technical issues arise in customer premises equipment (CPE).

Smith’s observation, according to Alexander, was that CPE is worse than when he looked at equipment in 2011.

For example, Alexander said, as well as v6-by-default, Smith found in some CPE, the IPv6 DHCP service on the WAN port would halt after a few days’ operation, requiring a reboot.

Other problems they encountered included default protocol parameters being set incorrectly (for example, DHCP timings set outside what’s documented in the IPv6 RFC), or the DHCP service not working on Ethernet ports.

Alexander told the conference that as a broadband provider, Aussie Broadband is now nearly ready to go all-IPv6.

Recently, 60,000 customers were retrospectively IPv6-enabled, and the next step will be to turn it on for the rest of its customers.