Aussie Broadband fibre network will be complete by end of June 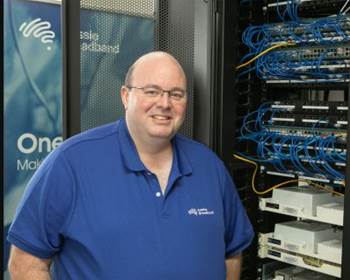 Reports strong growth in all segments.

Aussie Broadband expects to complete its 1200km fibre network connecting NBN points of interconnect (POIs) by the end of June.

Announcing the company’s first half 2022 results, managing director Phillip Britt said fibre has already been connected to 75 POIs, with another 21 to be connected by the end of March.

Britt said the company will be beginning to cancel Telstra fibre services from the beginning of March.

He said the company's own fibre network offers redundancy to all the connected POIs, and can support business connections along the fibre route.

Further expansion of its fibre network will be primarily driven by expanding business connections, he said.

CFO Brian Maher said the company has spent $67 million on the fibre: $52 million for the backbone network, and the remainder on customer links.

Growth in all segments

It’s been a busy half-year for Aussie Broadband, with the company making an offer for business provider Over The Wire (the target’s shareholders vote on the offer later this week), and the signing of Origin Energy as its first “white label” wholesale customer in August 2021.

Over The Wire brings services in hosted voice, cloud, and security that Aussie Broadband lacked, Britt told the call.

Britt told iTnews that Aussie Broadband expects “around $6 million of synergy benefit” out of the Over The Wire acquisition, as it transfers 800 customers to its own network “through a supplementary fibre build”.

“We’ve identified those 800 customers as being within 500 metres of our fibre,” he said.

Often, those customers are nearby to Aussie Broadband customers, or even in the same building, he added.

During the half-year, the company also migrated its mobile customers from Telstra to the Optus network, which necessitated sending new SIMs to all customers, and offering them two months’ of free services as a customer retention ploy.

The company identified the worldwide chip shortage as a challenge for mobile service growth, because it limited handset availability.

Aussie Broadband turned in $229 million in revenue, up 46 percent from the previous half year, and EBITDA of just over $9 million, up seven percent.