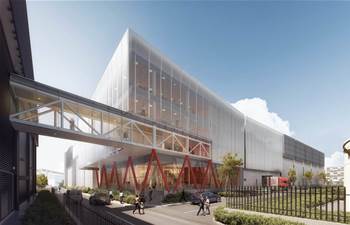 After its progress was criticised in report.

Equinix Australia is proposing to pool its electricity needs with the Australian arms of Nike, H&M and HSBC Bank to negotiate a good deal on access to renewable power.

The application for a joint procurement process was filed with the Australian Competition and Consumer Commission (ACCC) only days after Equinix Australia was ranked as the country’s third largest “telco, tech and IT” emitter.

The same ranking report [pdf], produced by Greenpeace, placed Equinix behind other large Australian data centre operators for having no timeline for a renewable electricity commitment, and no purchasing deal in place.

“The applicants wish to combine their individual demand for renewable electricity in order to collectively negotiate with a potential seller or sellers as a group,” the application states. [pdf]

“This will enable the applicants to create scale, thereby improving their prospects of securing cost-efficient bundled arrangements for electricity and green products.”

“The applicants propose to pool their electricity demand and place a single tender into the market calling for proposals for the terms on which a supplier (seller) will enter into a power purchasing agreement (PPA) with the applicants in the form of a contract for differences (also known as a hedge) for electricity and for the physical delivery of ‘green products’ (including large-scale generation certificates) from a facility,” the ACCC said.

“The ACCC has ... granted interim authorisation to enable the group to conduct the joint tender process and commence negotiations, but not enter into supply contracts, while the ACCC is considering the substantive application,” the commission said on Thursday last week. [pdf]

A final decision could be made as early as next month.

The ACCC said it had previously approved similar pooling arrangements in other industry sectors.