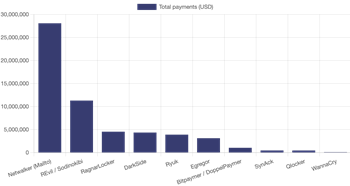 A former United States government cyber security researcher has launched a crowd-sourced ransomware payments tracking website that can be used to trace ransoms paid to criminals in the bitcoin cryptocurrency.

Called Ransomwhere, the site was launched by Jack Cable who worked for the US government Cybersecurity and Infrastructure Agency (CISA).

Ransomwhere is publishing data on the amounts paid to criminals, along with the bitcoin addresses they use.

Currently, the site is tracking a total of just over US$57.5 million in payments.

Most of the ransom money tracked has been paid out to the Netwalker gang, followed by REvil (also known as Soinokibi) and RagnarLocker.

Cable and Ransomwhere are encouraging ransomware victims to report demands they have received, and aims to be a resource for the security community.