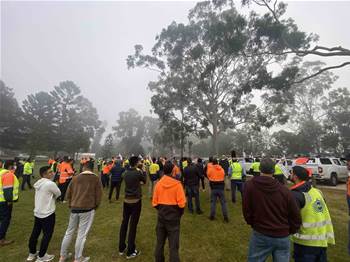 About 100 subcontractors working on the NBN held a protest in Sydney on Monday morning over pay and conditions as part of a larger nationwide action.

The Communications, Electrical and Plumbing Union (CEPU) said “hundreds of technicians” across the country had stopped work, including “over 100 subcontractors” that met in Sydney.

The subcontractors drove in a convoy to NBN Co’s North Sydney headquarters to continue the protest.

An NBN Co spokesperson said it did not anticipate disruption to connection and other activities as a result of the action.

"NBN Co would like to assure customers that it does not expect this morning’s meeting convened by the CEPU to have any impact on normal NBN network operations, new connection or assurance orders to rapidly correct any network faults that may arise," a spokesperson said.

NBN Co's spokesperson also said that it is working with the union and its delivery partners to try to resolve the dispute, and that it "appreciates" the work done by contractors.

"NBN Co engages delivery partners to fulfil many of the company’s construction and maintenance programs on its behalf," the spokesperson said.

"Our construction and maintenance contracts place responsibility for compliance with the law and relevant legislation on our delivery partners in relation to the contracted services.

"Delivery partners are free to use their own employees or sub-contractors when fulfilling the work and maintenance outlined in our contracts with them.

"We are working constructively with the CEPU and we are seeking to maintain and support strong, productive working relationships with our delivery partners and their respective subcontractors.

"NBN Co appreciates the ongoing dedication and diligence of the thousands of highly qualified field technicians and network engineers who work hard to maintain the reliability and performance of the nbn network across Australia."

National president Shane Murphy called for a senate inquiry to be established to dig into the issue.

“The mismanagement of Australia’s NBN network continues to be left unaddressed and workers have had enough,” CEPU national president Shane Murphy says

“Workers won’t put up with it any longer.”

Murphy alleged that contractors aligned with NBN Co’s delivery partners were “being forced to sign new contracts ... which cuts their pay”, while direct NBN Co employees received millions in bonuses.

The contractors also said that dispatch systems were slow and difficult to secure work from.

“Subcontractors are fed up with cuts to their pay and a shambolic booking system which is leaving subcontractors and NBN customers high and dry,” Murphy said.

NBN Co acknowledged the dispatch issues and said they would be fixed.

"NBN Co is aware of some issues that our delivery partners and field technicians have experienced with our recently deployed SMAX-Go mobile application for managing and logging work requests," the company's spokesperson said.

"We have significantly improved the app over the last few weeks to address functionality, system performance and general user experience pain-points, and will continue to modify and enhance the app in the next two weeks.

"We appreciate technicians’ patience while we work to improve the app."