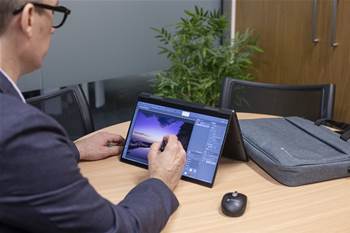 Follows launch of premium 2-in-1 notebook this year.

On January 1, 2021, Dynabook will celebrate the second anniversary of its name change from Toshiba Client Solutions. The past twelve months have seen the re-branded business really hit its stride under new owner Sharp Corporation.

Despite the global turmoil caused by COVID, Dynabook has notched up a series of achievements over the year, starting in January with the launch at CES of the world’s lightest 13.3” notebook. The X30L continued the company’s long track record of creating world-leading thin and light devices, a category it markets under the sub-brand Portégé.

An expanding range of corporate notebooks
The Portégé X30L was just a hint of things to come. Next off the rank was a family of premium corporate notebooks, the Portégé X30, X40 and X50. These slim and light notebooks also feature a magnesium alloy chassis and pack a complete suite of corporate and fleet management features into the elegant, Japanese designed form factor. For fleet-buyers, the choice of 13.3”, 14.0” and 15.6” models provided the flexibility to acquire a device that matched the mobility needs of every type of end-user, from the desk-bound work-from-homers to highly mobile field engineers and sales leads.

Dynabook’s long history in developing devices for enterprise users and fleet buyers mean that each device ticks all the boxes when it comes to features, with leading edge levels of security and end-user convenience, even including touchscreens as standard on each device: a feature much appreciated by smartphone-savvy swipers and scrollers.

Two world firsts in one year
Dynabook’s first year under its new name also ended with a dramatic announcement: the company’s second world-first in one year!

This time, the device was a convertible. The Portégé X30W-J launched on 1 December. It is a premium 2-in-1 that flips from tablet to notebook to presentation mode and more using a new and radically engineered dual-hinge system that adds strength and provides a premium user experience.

The X30W weighs as little as 989 grams, depending on configuration. This is a remarkable engineering and design achievement, considering users will feel that no compromises have been made in terms of feature set and capabilities. The Intel® Evo™ certified X30W-J runs 11th Gen Intel® Core™ Processors and Intel® Iris® Xe graphics and offers a battery life rating of up to 16 hours. Available with a Sharp IGZO full HD multi-touch screen, the device comes with a Wacom™ active digitizer sensitive to over 4,000 levels of pressure, making it a high precision instrument that lets users draw like Michelangelo, if they wish.

It’s been a great year for Dynabook, and for Dynabook’s channel partners and customers. So, what’s next? The year ahead looks equally bright, with an expanding range of new or upgraded models slated for release.

What’s coming up from Dynabook in 2021?
For a start, Dynabook will complete the process of delivering a series of upgrades to the X30, X40 and X50, migrating to 11th Gen Intel® Core™ processors and Iris® Xe graphics, with all the performance benefits that promises.

In addition, there’s a new range of value devices coming to market. The Satellite Pro C40 and C50 exchange the magnesium alloy bodies of the high-end models for durable and impact resistant ABS casework. Packing a full range of features and benefits, but without the high-end fleet management capabilities of the X-series, they offer budget-conscious buyers access to Dynabook’s engineering and quality, without the enterprise price tag.

Later in the first half, there’s promise of another breakthrough range: the latest iteration of the Tecra A-series. Details are limited for now, but traditionally many of the leading-edge features pioneered in the X-series flow though into the A-series which are released at price points more suited to the education market and SMB.

Dynabook: the 35 year old start-up
After the ownership change from Toshiba to Sharp, and the transition to the new name, it is clear that the design and engineering teams are back in full swing, continuing the 35-year tradition that they established under Toshiba's ownership of producing world leading devices – over 30 at last count.

Although it is too early to look deep into next year, Dynabook is showing all the energy and dynamism of a start-up. It’s safe to say there’s a lot to look forward to in 2021.