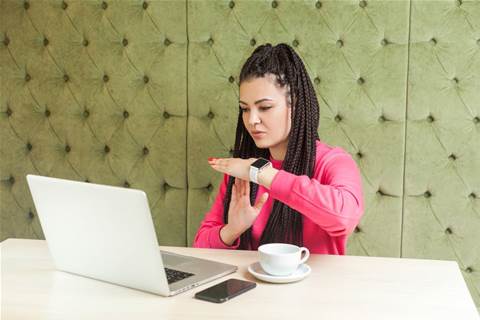 ANZ, CBA and Telstra are among large Australian organisations to standardise the video meeting tools they use and wrap policies around them to address the broader issue of fatigue associated with video conferencing overuse.

While on the one hand “experimentation with online meeting technologies such as Zoom, Microsoft Teams and Skype has opened people’s eyes to the kind of fast innovation in the workplace that is possible”, according to one UNSW researcher, it is also behind a sharp rise in staff fatigue.

Unconscious and non-verbal cues are easily missed or indecipherable in video conferencing. “We have to rely predominantly on verbal communication, which consumes a lot of our conscious capacity,” University of Melbourne researchers explained.

The rise of ‘Zoom fatigue’ - although in reality Zoom could be substituted for any number of platforms - has even led to calls to moderate or otherwise wind back its usage in future work constructs.

Recognising this, Telstra is one of a number of organisations that iTnews is aware of that is now setting specific blackout periods where no one can call meetings.

“In July, as just one example, we ran more than 8 million Microsoft Teams calls. Management meetings, Board meetings, team meetings are now virtual including this year’s Annual General Meeting – a first in our 160 year history.

“We’re very aware that long stretches on video calls can be draining so to give people some more space in their day, we introduced meeting free time for an hour every Tuesday and Thursday.

“We’ve encouraged our international teams, particularly those in the UK and US, to introduce meeting free times that make sense to them.”

Clarke noted the importance of leading by example, giving staff “encouragement and flexibility” to take regular breaks and to “prioritise their health and wellbeing”.

“There has been a lot of focus on providing access to mental health and wellbeing resources and 24/7 professional support through our employee assistance program,” he said.

“Keeping our teams connected and supporting their mental health and wellbeing has been our top priority during Covid.”

“We’ve blocked out meeting free time for the whole company at Contino,” head of talent for APAC Gerhard Schweinitz told a recent webinar.

“We’ve [put] two blocks in everyone’s calendar where no one’s allowed to book any meetings with anyone for the whole company.

“It’s been quite successful doing it that way because everybody is on the same page, and everyone knows not to put anything on at that particular time.

“We did it because a lot of the engineers just want to deliver code and they can’t because they keep getting dragged into meetings.”

While not every organisation has taken to meeting blackouts to prevent fatigue, the majority have set policies or other guidelines on virtual meeting scheduling.

At the same time, most - like Telstra - have been acutely focused on the health and wellbeing of staff through the pandemic, and have tried to incorporate social activities into their adapted ways of working.

ANZ Banking Group deputy CEO Alexis George told iTnews the bank encouraged staff not to start meetings on the hour, to allow for some breaks in-between.

“As part of our ‘How We Work’ initiative we’re providing our employees a handbook which has tips on working and staying well while working in a distributed way,” George said.

“Some tips include building connections by setting aside time for your team to come together and connect about things other than work, perhaps a virtual lunch, a daily huddle or after-hours social connection; and [to] consider starting your meetings at 10 minutes past the hour to allow people a break between back-to-back meetings.”

A CBA spokesperson told iTnews that it had also addressed meeting fatigue through its policies.

“We provided group guidance that included a comprehensive set of resources and initiatives to support leaders in managing remote teams and for our employees to manage their physical, mental and social wellbeing while working remotely,” the spokesperson said.

“We also surveyed our people regularly throughout this year to ensure we were listening to their experiences and feedback on their wellbeing, ways of working and how we could best support them.

CBA said employees were required to complete a safety learning module “to identify any health and safety risks that may be present in their home environment and provide guidance on the set-up of their designated work space.”

“Advice was also provided on how to use group tools and systems safely and securely when working remotely.”

For many staff of corporate organisations, there is also an element of fatigue in moving between meetings on different online platforms.

This has led to standardisation efforts in many organisations, reducing the number of duplicate systems in use and therefore the time needed to transition between them.

“We’ve sped up the rollout of Microsoft Teams as our preferred collaboration tool globally and are now focused on ramping up its capability and functionality across the globe,” ANZ’s George said.

“This includes further education and support for our people in the coming months.”