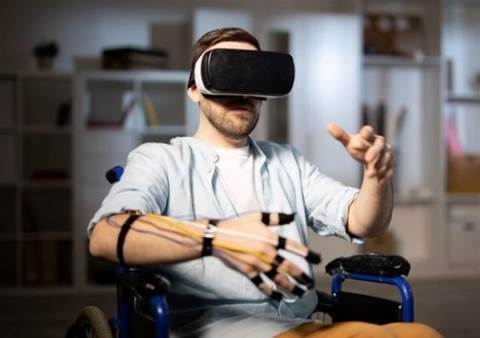 The US Department of Defense has granted Sydney-based researchers $5 million to explore how virtual reality (VR) can be used to ease nerve-related pain after spinal cord injuries.

The collaboration between UNSW Sydney and Neuroscience Research Australia (NeuRA) will use VR as a non-invasive intervention without the risk of toxicity or addiction associated with the use of medication.

Associate Professor Sylvia Gustin, the project lead at NeuRA and pain expert at the UNSW School of Psychology, said this kind of neuropathic pain “is similar to phantom limb pain, where someone with an amputated leg, for example, feels pain in the leg that isn’t there”.

The VR treatment targets neurochemical changes in the regions experiencing neuropathic pain, as well as the thalamus and sensorimotor cortex in the brain where spinal cord injury neuropathic pain stems from.

“We know that spinal cord injury neuropathic pain is underpinned by alterations in the areas of the brain that process movement and sensation,” Gustin said in a statement.

“Our cutting-edge research uses virtual reality to facilitate an immersive walking experience that can reactivate the brain’s sensorimotor signals, and thereby ease the pain these people are in.”

The study is the first to examine the underlying brain processes associated with treatment and pain recovery and builds on Gustin’s research into using VR as a means to restore sensation in people with paraplegia.

“Rather than treating spinal cord injury neuropathic pain, and hence phantom pain, we could potentially prevent it altogether,” Gustin said

She added that early results from preliminary trials are already promising.

“Participants are reacting remarkably to this in our pilot testing and the gaming component makes it really fun.”

The project is also supported by Virginia Commonwealth University in the US.