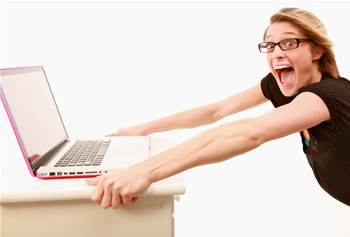 As NBN Co wraps up work on its side.

NBN Co will finish over-provisioning downlinks on most fixed line services by the end of this month, although at least one retailer is already marketing the change to customers as a “freebie” speed boost.

Over-provisioning was pushed by the Australian Competition and Consumer Commission (ACCC) as a way to compensate for the amount of bandwidth used to carry data packets and ensure they reach their intended destination, which is known as protocol overhead.

The ACCC contended protocol overhead was the reason why NBN users never hit the theoretical - marketed - speeds of their plans.

In response, NBN Co agreed earlier this year to over-provision downlink speeds on fixed-line services by up to 15 percent.

This is now effectively in-market across most NBN speed tiers, though users won’t see the additional speeds until RSPs activate it on their respective networks - and it is also subject to other constraints in the end-to-end network.

“NBN Co’s overprovisioning of the downlink component of wholesale fixed line speed tiers by around 10-15 percent, where possible (with the exception of the new Home Ultrafast [gigabit] speed tiers) will be completed at all 121 points of interconnect (POIs) to the NBN by 30 July 2020,” an NBN Co spokesperson told iTnews.

“Retail service providers (RSPs) were advised last week of the scheduled completion of this work by July 30, and RSPs will need to implement a minor technical modification to their respective networks to pass on this capacity and speed enhancement to their customers.”

NBN Co’s spokesperson noted the intent of the over-provisioning was to allow “more customers [to] experience download speeds that are closer to the maximum theoretical download speed of their chosen retail speed tier, subject to factors such as the capacity of the internet retailer’s network and the efficiency and throughput of their in-home wiring, router and wi-fi equipment.”

Customers of Telstra were told today that they “may experience a boost to your download line speed of up to 15 percent in the coming weeks”.

“Who doesn’t love a little freebie?” the telco teased.

“If the connection into your home is capable of achieving these new speeds, this means more speed for everything from streaming your favourite shows and movies; playing games, and working and learning from home.”

That could mean a user on a 50Mbps plan - under the right conditions - may now find speeds above 50Mbps achievable.

The positioning of that extra speed as a bonus, rather than as speed the customer was already paying to achieve but couldn't, may also raise fresh NBN plan marketing questions for the ACCC.

Telstra said it had already performed “some speedy work” on its side to pass through the over-provisioned downlink speeds to 1.6 million NBN customers.

“[We] are planning to progressively roll it out to the rest of our consumer and small business NBN [customers] over the next 30 days,” it said.