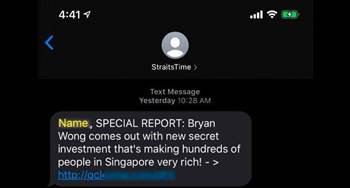 Victim's details show up on the web.

Personal details of tens of thousands of Australians who fell for a fraudulent cryptocurrency investment scheme that used fake media sites and celebrity endorsements have been leaked onto the web.

Singaporean security vendor Group-IB discovered 248,926 sets of personally identifable information, of which 82,263 records were from Australian users, leaked by an unknown party.

Group-IB said the scam is a three-stage fraud similar to the prior Bitcoin Evolution scheme.

Victims first receive a text message, purporting to come from a well-known media outlet, with a unique short link.

The short link takes victims to another URL that has a form already populated with some of the user's data, and which redirects to fake websites masquerading as local media outlets.

Australians would see a fake version of the ABC website.

Group-IB believes the user data on the scam sites was obtained in a separate fraud, or simply purchased from a third party.

Clicking on any link would take users to a bitcoin investment scheme, where they are asked to part with existing cryptocurrency.

The security vendor warned users to stay vigilant and to check the details of the sites they connect. It also said that long redirect chains are a red flag to stay away.