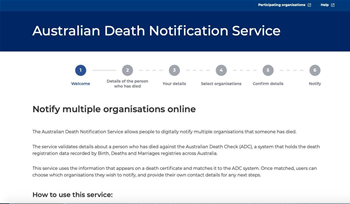 Major telcos next in line for 'tell us once' initiative.

All of the big four banks have now linked up with the NSW government for its new digital service that allows citizens to notify multiple organisations when a family member or friend passes away.

The Australian death notification service (ADNS), which the state government began piloting with ANZ Banking Group in April, simplifies the once arduous process of dealing with deceased estates.

It has been developed as a national service by the Department of Customer Service in collaboration with Births, Deaths and Marriages agencies across Australia.

While the pilot has so far been limited to removing the need for individuals to visit a bank branch to settle accounts, the ADNS has been built to become a fully-fledged 'tell us once' service.

This would ultimately mean that citizens are able to notify government agencies, financial institutions, utilities and other subscription-based services in one go when a person dies.

But with a number of new banks from across Australia having recently joined the service, and talks now underway with telcos, the government is beginning to realise its vision for the service.

In a LinkedIn post, Customer Service Minister Victor Dominello said the Commonwealth Bank, NAB and Westpac, as well as a number of other banks, had now joined ANZ in the trial.

The ADNS webpage indicates the other banks to participate in the trial are the Bank of Melbourne, Bank SA and St. George Bank.

“I am pleased to announce that the four major banks have come together to help extend and build the ADNS,” he said.

“We are making great progress; our next stage is the on-boarding of the main telcos.”

“A big thank you to ANZ, Commonwealth Bank, NAB and Westpac and the other banks we are partnering with.

“I will provide you all with an update on how the pilot has been tracking with the four major banks along with an invite to the showcase in the coming weeks. “

The ADNS works by matching details about the deceased person against the Australian Death Check register, which has been developed by Queensland’s Registry of Births, Deaths and Marriages as a single source of truth for death records.

The national register, which is still in a soft launch phase, allows agencies and eligible commercial entities to verify information against more than two million death records dating back to 2000 from Births, Deaths and Marriages agencies across Australia.

Organisations are required to connect to the register by connecting through an approved data service broker. Equifax, fraud and identity verification form GBG, and Illion are the only brokers to be approved to date.

“When a loved one passes away, the family is often required to notify over 40 government and non-government organisations of their passing,” Dominello said.

“This is traumatic. The ADNS takes this process trauma out and replaces it with a one-stop notification service.”