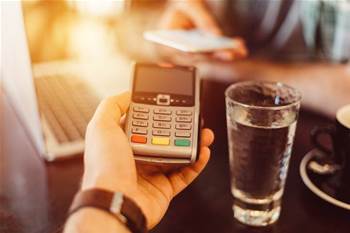 Australian-made electronic payments platform eftpos has fired-off a major pricing broadside in its battle to challenge Mastercard and Visa’s entrenched systemic hegemony over contactless debit payments, halving its interchange fee clip to just two cents a throw for smaller merchants who route via the local scheme.

The move, which will take effect from 1st July and broke cover after eftpos necessarily flagged the change with regulators, comes on the back of the continued COVID-19 economic slowdown and a sustained push by struggling merchants to get their banks to route tap transactions onto cheaper payments rails.

Debit transactions made over eftpos’ infrastructure currently carry a flat interchange fee of four cents, but this will fall in the new financial year two just two cents, thus substantially strengthening the case for banks to more heavily promote least-cost-routing (LCR) that has been vigorously opposed by Mastercard and Visa.

The fees banks charge merchants for payment facilities have come into sharp focus during the COVID shutdown, with most banks now essentially parking recurring fees – like terminal rental, merchant service and account keeping fees – for businesses that are not trading or in hibernation.

What’s much less known is that the big hygiene push to get customers to tap for transactions has created an overnight bonanza for multinational credit card schemes Visa and Mastercard because they, in conjunction with banks, route most contactless debit transactions down their own credit rails.

The big hygiene windfall will likely be turbocharged by major grocery retailers bumping the PIN-free ceiling for tap transactions up from $100 to $200, as revealed by iTnews in April.

Transaction routing costs remain a red hot issue for merchants, because it’s shopkeepers who wind-up wearing the costs of card acceptance – one of the reasons lower margin businesses attempt to claw back fees through card surcharges or refuse to accept the likes of American Express.

The ongoing issue regulators and merchants face is that without intervention, global schemes like Mastercard and Visa will smother low-cost domestic competitors like eftpos – in which the banks and retailers have a collective stake in – and essentially own the market and pricing power with it.

A significant challenge for eftpos has been persuading banks to promote or offer least cost routing as the default setting for payment rails, especially for tap transactions.

There are similar issues for routing digital and online transactions, where eftpos also recently launched a capability for debit, an increasingly important issue for omnichannel merchants.

Also dubbed merchant-choice-routing by some banks, the measure works by allowing the merchant to stipulate what payments rails their transactions trunk through – rather than the banks deciding for them.

Until COVID hit, banks generally had given least-cost-routing a fairly tepid support, not least because their card-issuing arms made more money from meaty interchange fees than their acquiring arms, which supply banking services to merchants.

That situation was not helped by major retailers being schmoozed by credit card majors to issue their own branded plastic like the Coles or Harvey Norman Mastercards.

The big regulatory shift over the last few years has been Reserve Bank of Australia pressure to push down interchange fees and re-weight how they are spread to address global schemes gaming the system.

However the impact of those gradual regulatory changes to restore competition in the Australian market, which were doggedly fought by global schemes, has now likely been diluted because of how COVID has changed Australia’s payments landscape.

The contactless-by-default setting of many merchants during COVID, and for the foreseeable future, raises the logical question as to whether stronger measures, like mandating least cost routing as the default setting for debit unless a merchant opts for a pricier option.

The fact that eftpos has now halved its interchange fees to two cents now acts to strengthen the case for that mandate to prevent a hegemony being re-cemented back into position after more than a decade of reforms.