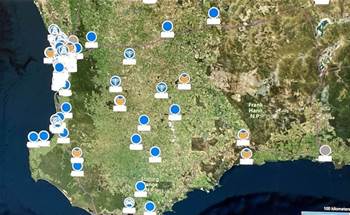 Improves visibility over cops in the field.

All on-duty police officers in Western Australia can now be located in real-time thanks to a new application developed as part of WA Police’s OneForce digital policing program.

The app, dubbed OneForce Locate, has been built to give the force complete visibility of its 4000-plus frontline officers across the state when they’re in the field.

It is one of a number of mobile apps that officers can now use to perform policing functions, following the deployment of iPhone 11 smartphones over the course of the past five months.

Developed in partnership with Modis Australia (previously Ajilon), OneForce Locate allows officers to view their location, status and current duties, as well as that of their colleagues.

The app - which is also available as a desktop or web app - can also be used by supervisors to push notifications to officers in order to coordinate incident response.

With the largest geographical area of any police jurisdiction in the world, WA Police - like other law enforcement agencies - has previously struggled to locate its officers in real-time.

However, this presented a problem when officers left their vehicle to perform any policing duties or were patrolling on a bike or horseback.

“Whilst we have vehicle locations, once officers get out of the vehicle and start walking … we had no idea where they were,” he said.

But with the app, Cann said the GPS location of each officer was now updated every five seconds, though this is dependent on triangulation from a mobile network.

“If you’re deep inside a building, it has trouble giving us a precise location, but we generally find that if they’re out on the road it’s within about five metres,” he said.

The app has helped officers to quickly locate their colleagues, with Cann citing an example where the app was used to locate a canine officer in northern WA after he left the roadside.

“The officer ran through the bush with his dog for about four kilometres on this trail, and while he literally had no idea where he was, he was able to call for backup on his radio,” he said.

“And because he had his phone on him, he said [backup] arrived within a minute or two at his precise location because they all used their phones to track down where he was.”

Designed and built with officers

The app, which is hosted on Microsoft Azure as a managed application, was built by a team consisting of both Modis staff and sworn police officers from WA Police’s digital policing unit.

“The team that delivered this has been embedded with police officers, and that’s what makes a difference,” he said.

“That’s when you get an application that really does what the business needs and makes sense to the individual officers.”

Hawkins said this approach was helped by Modis’ long-standing partnership with WA Police, which has allowed it to develop a “really strong understanding of their technology landscape”.

One such feature within the app built with officers in mind is the ability for officers to toggle the GPS signal on or off depending on whether they’re on duty or not.

“We gave them that so they feel comfortable that we’re not tracking what they do 24 hours a day,” Cann said.

Officers similarly have the ability to assign themselves a role depending on their duties for the day, which is then displayed on the map.

“The BIS [Business Information Systems] team has been very responsive to the needs of the frontline troops and excited to be building systems and apps that really benefit WA Police and the community as well,” Cann said.

Since being pushed out to phones in December, OneForce Locate has been tweaked five or six times, including in response to the COVID-19 pandemic, based on officer feedback.

This has been possible because the app is “completely set up with Azure DevOps, and so what that means is it's really responsive to change”.

Hawkins said this allowed additional functionality to be added to the app for the police response to COVID-19 in a single day in March.

He also said that using native applications, and running OneForce Locate as “platform as a service, rather than on old school VMs”, allowed the force to keep run costs to a minimum.

Policing on the go

OneForce Locate is one of a number of apps now at the disposal of WA police officers, following the rollout of iPhone 11’s over the last five months.

The deployment, which was initially for only frontline officers, has now been extended to all officers after WA Police received additional funding.

Officers can also use the devices to capture and view video and photos and upload the content to Axon’s digital evidence management platform using the Axon Capture app.

In addition, officers now have access to Microsoft Office 365, including Teams, which means they can access email on the go, share files and chat with other officers.

“Officers didn’t even have access to outlook before we did this. Only a limited number of WAPOL personnel could access email on their phone,” Cann said.

“So it's been a real productivity boom, not just with the apps that we’ve built."

Cann said the force was now exploring how it could take statements out in the field and have the witness sign them at that time using the iPhones, rather than go back to the station.

“There’s a lot of forms that WA Police officers have to fill out and so it means that they have to take a pile of forms with them on the road,” he said.

“I’d like to be able to convert a lot of that to be electronic and automatically push them through to the right places using workflows.

“We also need to be able to capture family violence and general crime incident information on the phone as well.

“Those couple of things will even more dramatically improve the productivity of the agency.”