NBN Co expects to pick up broadband tab of 300,000 businesses 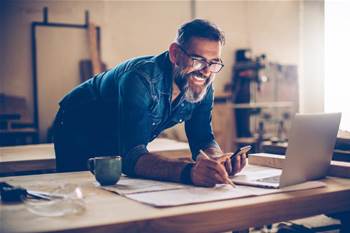 Reveals relief not capped at $50m.

NBN Co has revealed its internal modelling shows around 300,000 businesses are likely to be unable to pay their NBN bills in part or in full between now and October.

The network builder’s chief customer officer for business Paul Tyler also told Ausbiz TV’s The Pulse program that while $50 million of a $150 million relief package is allocated to business, this is an “uncapped” amount, meaning NBN Co won’t need to draw a line in the number of businesses it can temporarily support.

The flagship of the business portion is the ability to waive half or all of a business’s NBN charges through to the end of September.

Tyler revealed the potential scope and cost implications in an interview, published as an unlisted video on Monday this week.

“There’s no question that a lot of businesses are doing it really tough, and we want to play our part to support employment and productivity,” Tyler said.

“We announced a $150m support package just last week, of which there’s $50m that we’ve looked at allocating towards small and medium businesses, and we want to support them to stay connected during that period of time.

“Throughout that whole period of time, we’ve modelled that we’ll probably be exposed to something like 300,000 businesses that would be either unable to pay their bills in full towards their retailers - and hence we’ve offered our support to those retailers - or at least partially unable to meet those payments.

“It’s an uncapped amount actually - that $50m is our estimate. But we really want to support businesses through this period, but also to come out the other side in the best shape they can be.”

It wasn’t immediately clear whether the residential support aspects of the relief package are similarly uncapped.

There are some clear limits on how many unconnected, low-income households with school-aged children will be temporarily supported with free internet services through to September.

NBN Co has expressed this as a $1 million cap per retail service provider; Superloop gave some indication of what this would mean when it capped its own participation at 5000 households.