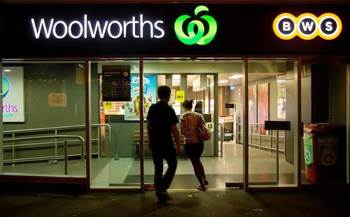 Woolworths has asked the government and banks to raise the limit of contactless card transactions from $100 to $250 to prevent hundreds of thousands of customers interacting with PIN pads during a pandemic.

CEO Brad Banducci told ABC Radio’s Drive program yesterday afternoon that the idea had been raised during a 1.30pm meeting yesterday by the Supermarket Taskforce.

Formed by the Department of Home Affairs earlier this week, the taskforce aims to break the retail logjam with “representatives from government departments, supermarkets, the grocery supply chain and the ACCC” on the body.

Banducci saw raising tap-and-go payment limits as important and believed previous barriers to doing so would fall away.

“We’re encouraging tap-and-go [bcause] the less touchpoints there are, the less risk there is of course in the store,” he told ABC Radio.

On the current $100 limit without needing to use a PIN, Banducci said: “This is an issue we raised at the supermarket government taskforce at 1.30 today.

“We’ve asked the government to work with us to see whether we can raise the limit to $250 actually, and if we did that, there would be 350,000 less physical interactions required between our customers and a PIN pad.”

Banducci did not immediately quantify the time period that 350,000 number referred to.

“I’m not saying we’re going to [raise the limit] but it is one of the things that we’ve raised the financial institutions as well as the government [as] just another small measure that will help,” Banducci said.

However, quizzed on whether he thought authorities were receptive, Banducci said: “I think we’re really coming together as a community and as a society over the last week.

“It’ll happen - in my view it’s just a question of when.

“It’s a question of hours or days.

“We’re not in the ‘if’ anymore, which I think is very pleasing.”