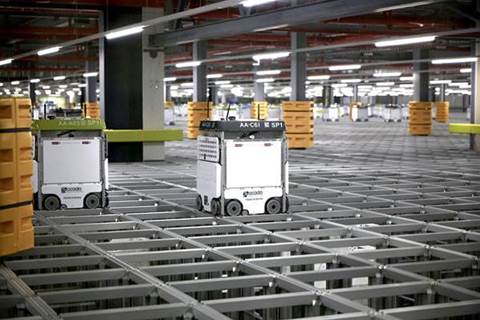 Uncertainty over equipment delays coming out of China.

Australian grocery and liquor giant Coles has cautioned that its giant supply chain transformation could be hit by equipment delivery delays because the coronavirus in China, though the digitally-powered transformation slated to shave $1 billion is still officially on track – for the time being.

Speaking to Coles’ 2020 half-year results, chief financial officer Leah Weckert said that while Coles had “further progressed payments on the supply chain modernisation program”, there were some questions on shipping times.

“It is worth noting there is uncertainty around the coronavirus delaying some renewal equipment being shipped out of China which may impact the renewal program,” Weckert said.

“We will be able to provide a further update on this at the [third quarter sales results].”

While it is known that some equipment like new smart fridges have been delayed, what’s less clear is whether a small army of robots used to shuttle goods around distribution centres [DCs] for dispatch could also be delayed, either by shipping or progress on fitting out the new warehouses.

Coles’ big supplier on that front is Ocado, which the retailer tapped just under a year ago to deliver automation equipment and software for two new DCs in Sydney and Melbourne that will power online fulfilment that both Coles and Woolworths have struggled for years to make profit margin accretive.

While both Coles and rival Woolworths last year declared their respective online businesses to be margin accretive, neither disclose the actual numbers in their results indicating that the margin is small, enough to be counted as non-material.

This half Coles delivered a net profit after tax of $498 million, but that number is still caught up in the spinout from Wesfarmers. Straight up it's a  drop of 34 percent on the prior corresponding period ... but an increase of 1.7 percent if you factor out Wesfamers businesses.

Either way, the modest result was overshadowed by a $20 million provision for underpaid wages.

Weckert said that capital expenditure for Coles for the period had been partly driven by the commencement of the Witron distribution centre build in Queensland this half, which is also related to the supply chain modernisation.

Rolled-up in the supply chain overhaul is a broader technology re-platforming of Coles that over the last year has roped in Microsoft’s Azure cloud, NBN Co. for communications, Accenture for integration and SAP’s S4/Hana and Success factors for ERP and staff management.

Both Weckert and Coles’ chief executive Stephen Cain on Tuesday stressed that despite the large body of work and capex, costs reductions were tracking as expected, with $95 million in savings already extracted against the $1 billion target.

Coles is relying on tech-enabled efficiencies and savings to eventually compound and annualise over the next three years to hit the $1 billion number.

Weckert also sought to set expectations that capex would rise as major tech projects hit the implementation and rollout stages in the near future.

“We have quite a comprehensive suite of capital projects that we have clear visibility of,” Weckert said.

“The supply chain modernisation project or the Ocado project, even things like some of the SAP implementations, with the implementation of Success factors and the like…they are initiatives where we know we have additional capex coming.”

However the Coles CFO also revealed the retailer was pursuing an agile-like approach to standing-up projects and quick wins on savings quickly to determine what worked well and what did not when it came to chasing costs out.

“There are tactical, easier investments that we are making,” Weckert said. “And being aggressive and forward thinking in the trials we are putting in place and actually making sure they are working before we put money behind them."

Coles CEO Cain said if the situation in China did not improve by the end of March the retailer would then need a “Plan B” in terms if its exports there and goods coming in.