Aussie researchers develop flexible touchscreens that can be printed like newspaper 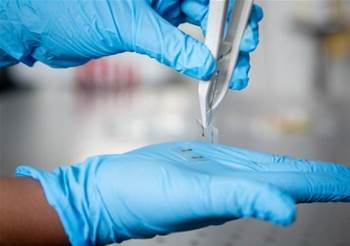 Shrinking from 3D to 2D.

A team of Australian researchers has developed a nano-thin, ultra-flexible touch-responsive material that can be printed and even rolled up like a newspaper in what could be a game changer for a US$7 billion global industry.

The transparent conductive sheet is around 100 times thinner than existing touchscreen materials and flexible enough that it could effectively be manufactured using roll-to-roll processing.

“We’ve taken an old material and transformed it from the inside to create a new version that’s supremely thin and flexible,” Daeneke said in a statement.

“You can bend it, you can twist it, and you could make it far more cheaply and efficiently than the slow and expensive way that we currently manufacture touchscreens.”

The researchers were able to create an atomically thin layer of ITO using a liquid metal printing approach where the alloy was heated to 200C, melting the metal and enabling it to be rolled over a surface from printing in a nano-thin layer similar to how ink is deposited onto the sheets of a newspaper.

Making the transparent, conductive film currently used in most touchscreens is comparatively slower, more expensive and energy-intensive as it needs to be done in an expensive batch process inside a vacuum chamber.

While the chemical composition of the 2D sheets is the same as standard ITO, it has a different crystal structure thanks to its novel manufacturing process which produce the new mechanical properties.

“The beauty is that our approach doesn’t require expensive or specialised equipment – it could even be done in a home kitchen,” Daeneke said.

“We’ve shown it’s possible to create printable, cheaper electronics using ingredients you could buy from a hardware store, printing onto plastics to make touchscreens of the future.”

Since the new ITO is so much thinner, it is also significantly more transparent than commonly used materials - absorbing just 0.7 percent of light compared to the 5-10 percent in standard conductive glass, the research paper states.

The researchers estimate that by letting more light through from a touchscreen device’s pixels, the new material could help extend battery life by up to 10 percent.

It also paves the way for the material to be adopted in other devices that use transparent conductive oxides - what the researchers said is a US$7 billion industry with applications in LED manufacturing, optoelectric devices, solar cells, electrochromic windows, and lab-on-a-chip biosensing devices.

A working touchschreen device was made with the new ITO material as a proof-of-concept, which has been submitted as part of a patent application.

“We’re excited to be at the stage now where we can explore commercial collaboration opportunities and work with the relevant industries to bring this technology to market,” Daeneke added.