NBN Co has revealed for the first time the number of active satellite users within a 25 kilometre radius of most major Australian capital cities.

The network builder disclosed the numbers under freedom of information (FoI) on December 18 last year. [pdf]

This in itself is remarkable - it’s only the third time since December 2017 that a FoI lodged with NBN Co has been successful.

But it also provides the most accurate picture to date of how many premises in otherwise urban zones prove too hard to connect to the NBN using anything other than Sky Muster.

The FoI reveals there are 1033 premises connected to Sky Muster that are geographically within a 25km radius of the GPO in Sydney, Brisbane, Adelaide, Perth, Melbourne and Hobart. Almost half are within 25km of Adelaide’s GPO.

iTnews has confirmed these are all premises with active Sky Muster connections. 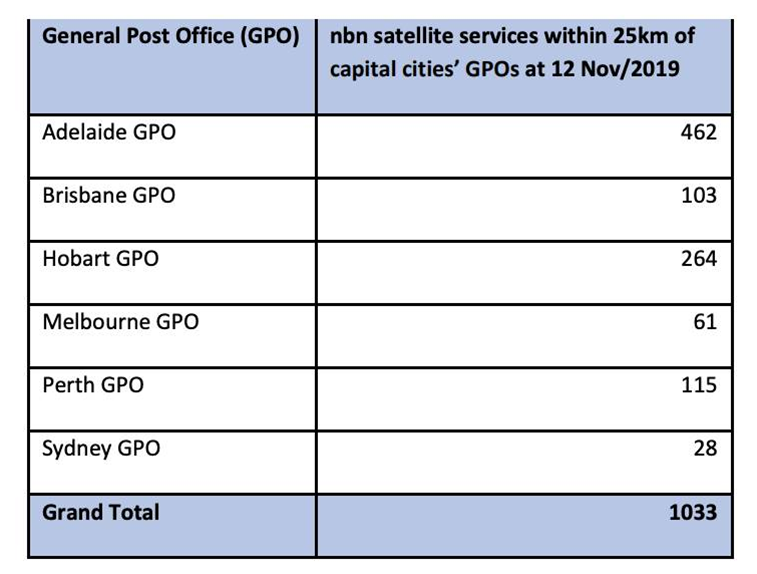 For several years there's been interest in the number of metropolitan fringe premises that NBN Co is putting in the Sky Muster footprint because the cost-to-serve with other access technologies was too high.

One cause for concern is that rural and remote users could be disadvantaged if too many people connect to Sky Muster. Already, they mostly pay more and receive less quota than NBN users on other access technologies.

Back in March 2017, a dump of NBN rollout data by electorate - again, released via FoI - showed 4013 premises in “urban” electorates had been allocated Sky Muster.

It’s unclear how the number of “urban” premises eligible for Sky Muster has changed since.

But the new set of numbers shows appears to show that, as with the rest of the Sky Muster footprint, many premises eligible to connect don’t do so.

A connection rate of 1033 out of 4013 eligible premises is around 25 percent take-up; that’s more or less the same as the footprint wide take-up rate of 23 percent.

It also shows that urban Sky Muster users are unlikely to pose major capacity problems for other satellite users, given they are a bit over one percent of all active Sky Muster users.

“It is important to note that distance from a capital city’s GPO is not necessarily an indicative measure of whether a given premises can expect to be connected to the NBN via satellite vs. fixed line or fixed wireless services,” it said.

“It is NBN Co’s practice to deploy Sky Muster satellite services where providing fixed line or fixed wireless connections to that area would be unworkable.”

It would also be instructive to know how the number of active Sky Muster premises changes if a smaller radius is used, since a 25km radius applied to some capitals quickly encompasses some semi-rural areas; however, iTnews was unable to gain that point of comparison at the time of publication.