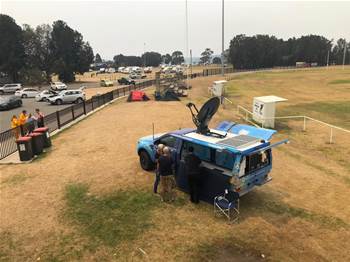 NBN Co has sent one of its Road Muster trucks to a bushfire evacuation centre at Batemans Bay on the NSW south coast, offering free wi-fi and device charging for the community.

“The NBN Road Muster truck has arrived at the evacuation centre at Batemans Bay,” the company said in a Facebook post late Thursday.

“All members of the community are welcome to access this free wi-fi service at the evacuation centre in addition to any charging that may be required (mobile phones, tablets).

Seven people died and 176 homes were destroyed by bushfires on the NSW south coast this week.

Holidaymakers have been advised to leave the area by the weekend with catastrophic conditions again forecast.

Communications have been cut by the fires and all telcos with affected infrastructure have warned it could take some time to properly reconnect services.

NBN Co’s use of the Road Muster truck was welcomed by social media users.

The trucks, which were revamped in 2017, have the “ability to simultaneously operate a secure wi-fi hotspot around the truck itself along with public access wi-fi in a nearby building such as a community hall for disaster victims”.

About 20 people can also plug in and charge mobile devices.

Telstra said it has “hundreds” of employees working with teams at fire grounds across Australia to “ensure our teams have access to areas of need as soon as they are deemed safe to enter, or under escort.”

“We’re doing everything we can to get these communities back up and connected as quickly as possible, but given the horrific conditions we have seen over the past few days, this may take some time,” CEO Andy Penn said on New Years Day.

“In some cases, adverse conditions and road closures are preventing us from safely reaching some areas. This is the result of either fires damaging our infrastructure, or loss of power to our sites.”

Both Telstra and Optus have also said they will waive mobile charges for volunteer firefighters for December and January.