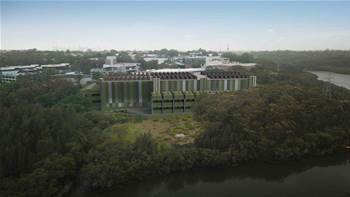 Privately held data centre developer AirTrunk has ploughed $1 billion into a new facility so big and power hungry it will boast its own substation to pump out 110 MW of load, snapping-up a sizeable four hectare lot in Sydney’s glitzy Lane Cove.

Residential developers had been eyeing off the site premium site to build 900 units, but ultimately lost a bid to rezone the land from light commercial to residential.

Go-to data centre architects Greenbox, have scored the design gig. The architecture firm's other work of note includes Equinix's SY4, MacTel's IC3 and NextDC's S1, S2, M1, M2, B2, P1 and C1 as well as a swag of work for Digital Realty.

According to AirTrunk's spec sheet the big new shed will have 24 data halls when complete, mapping out to 28,000 m2 of technical data hall footprint. There will also be 4,000 m2 office and storage space.

Airtrunk, founded by infrastructure veteran Robin Khuda who previously made large and successful plays at NEXTDC and PIPE Networks, says the new SYD2 facility will boost capacity over its existing SYD1 facility in the city’s west and MEL1.

The infrastructure provider has also snapped up more land next door to SYD1 and MEL1 to allow it to boost computing power grunt to more than 130MW for each facility to bring its total IT load capacity 370MW.

The race to build the giant new sheds comes as competitors, including Equinix, also double down on their land holdings as the residential market draws breath amid a credit squeeze hitting overseas and local investors aimed at taking heat out of the market.

“AirTrunk’s new data centre in Sydney’s north and the expansion of our existing flagship facilities in Australia are the result of continued and strong customer demand for our proven hyperscale data centre solutions,” Khuda said.

“We are uniquely positioned to offer the speed, scale, reliability and cost efficiency that our customers need from their data centres now and into the future.”

A quick build is also a good build when it comes to delivering cloud commercial real estate for private equity investors and tenants alike, and Paul Slaven, AirTrunk’s chief development officer, is talking-up his firm’s speed to market.

“Our unique construction methodologies and robust supply chain enable us to deliver large scale capacity for our customers, quickly and cost-effectively,” Slaven said.

“Whilst fast deployment and cost efficiency is important, AirTrunk’s focus is to ensure the highest safety and quality standards for our employees and customers.”

Of course, it doesn’t hurt that previously overheated labour demand in the NSW construction sector has eased recently, making projects quicker and cheaper to deliver.

Less certain for DC developers is the current ambiguity around the structure of the federal government’s energy policy, especially renewables, that is being increasingly criticised by the business community and large energy buyers.

AirTrunk’s decision to mainline juice via “a dedicated 132kV substation” for SYD2 indicates that data landlords, who essentially resell price volatile electricity at fixed rates to tenants, are increasingly upsizing to hedge against price rises.

The firm said the substation will allow “the most reliable power infrastructure at significantly lower electricity rates for customers.”

SYD2 at a glance: