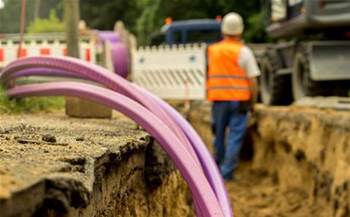 As FY20 targets look as large as ever.

NBN Co is standing firm on its resourcing of the fibre-to-the-curb (FTTC) build, despite needing to double the number of serviceable premises and active connections in the next nine months to meet its FY20 target.

The company revealed strong progress in the construction of the network across all access technologies - bar FTTC - in its first quarter numbers released Tuesday.

FTTC has proven to be more complex and costly to roll out than first thought - and the quarterly numbers show those challenges remain.

NBN Co managed to make 54,107 premises in the FTTC footprint ready to connect between July and September this year.

But it would need to declare that many premises a month - not a quarter - on average to meet the FY20 target in its most recent corporate plan.

It’s a similar story on activations, although the bright spot for NBN Co here is that activations outstripped build efforts during the first quarter.

NBN Co saw active FTTC connections up 96,033 in the three months to September 30.

It can take confidence that demand for FTTC connections is there, meaning it should be able to meet the activations number as long as it can complete builds at a faster pace.

An NBN Co spokesperson told iTnews that the company did not intend to pull construction resources from other parts of the build to make its FTTC targets, even if the build for other access technologies is rapidly approaching completion.

“We remain on schedule for FTTC design and construction and our progress to date is reflective of the lead time associated with deploying deeper into the local network,” NBN Co’s spokesperson said.

“Our continued progress on FTTC deployment will be reflected in future ready to connect and activation metrics as we work to complete the volume network rollout by 30 June 2020.

“We have adequate resources allocated and available to complete the volume network rollout across all technologies by 30 June 2020 – and do not foresee any need to reallocate resources from the deployment of other technologies in order to meet our target completion date.”

The first quarter numbers show NBN Co is making stronger progress in other parts of the build.

In HFC, for example, NBN Co gained 257,585 active users in the first quarter to reach 1.16 million, placing it well on track to hit 1.6 million active HFC users for FY20.

The company also 2.8 million active FTTN/B users out of an expected three million in FY20; again it appears NBN Co will have no issue hitting that corporate plan number.