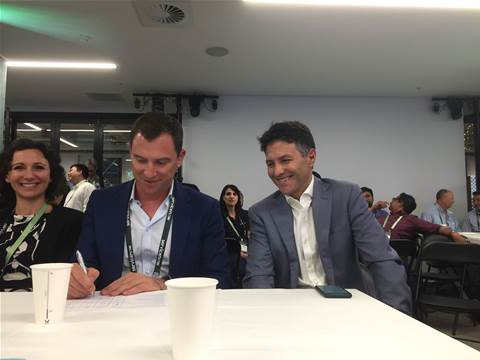 Facing the reality many on his own team had bet Labor would win and that he's been gifted a second ministerial life, the man now in charge of Services Australia urgently started shopping for immediately saleable service delivery reform models that would work.

The kind that could rapidly transform his portfolio from the punitive trap it had dug to snare incoming adversaries into one that could deliver tangible improvements at scale.

Winning is great. It’s even better when you beat the odds. But then you need a strategy, preferably one that can detox the well you just salted.

So, as millions languished on hold or got as busy signal from Centrelink, Robert called Victor Dominello, New South Wales' Customer Service Minister for guidance.

Within days Prime Minister Scott Morrison was openly spruiking the state’s success story as a restorative for public confidence in government services.

“If we are doing well and the feds can pick up on where we are, and more importantly synergise services and the delivery, then that’s a win-win.” Dominello tells iTnews on the sidelines of a ServiceNow public sector hackathon.

“He’ gets the space. He’s doing great work and that’s a good start,” Dominello offers of Robert.

“There’s a lot of ministers who quite frankly would struggle to spell data let alone implement any reforms around data and digital.

“And he reached out within two to three days of his appointment, and we had a long chat and debrief around how we started building Service NSW and started mapping it out.”

Dominello says that he hasn’t seen the report of his former departmental secretary Martin Hoffman, who led the review into Human Services as it morphed into Services Australia and is now head of the National Disability Insurance Agency.

But he insists that quick, demonstrable wins that everyday people can relate to are essential to winning trust and the capital to continue pursuing reform.

Hackathons might be a dime a dozen these days with their agile lexicon, butcher's paper diagrams and Post-It now fodder for satires like Utopia.

Dominello doesn't care. He wants public servants to challenge orthodoxy with improvement and he'll show up to snatch good ideas as they emerge.

There’s no monopoly on good ideas for service delivery improvement. It doesn’t always hit the mark first shot. And you have to make your own luck.

It also helps to think positive and call out upsides without attacking frustrated end users.

It’s been less than 24 hours since the new NSW Digital Driver’s Licence escaped the AppStore coop as a live product without a ministerial or departmental announcement.

A couple of crashes later, Dominello offers that “reform is not for the faint-hearted” while at the same time pointing to the huge demand for the product as proof the overall strategy is right.

His mandarin, Damon Rees, is back at the factory manning the fire extinguishers.

Dominello offers that the journey to get to the digital licence involved straddling a pile of back-end legacy. It included the former Roads and Traffic Authority's mainframe-based "Drives" architecture that sported a customised blend of Solaris, Unix, Oracle and Java.

Meanwhile, back at the hackathon, which is a room filled with public servants trying to figure out better ways of spending money than just throwing it to the Big Four consulting firms, a pragmatic and effective app to expedite drought relief wins top honours.

Even so, Dominello is eagerly eyeing off another hack that weighs the effectiveness of routine government communications against the din of social media, a channel prone to skewing messaging scores.

“There's those, the silent majority that quite frankly, are just so busy, and they just want the noise out of their life, and they don't want to be part of the chatter,” Dominello observes.

“How do we engage them and how do we understand what their needs their concerns are before it gets to either 'super good' or 'super bad' and listen to that.”

He knows where the edges are; but it's the middle he wants to move.

Equally, Dominello wants people challenged by digital delivery to be included in the equation so they are not left behind, marginalised or isolated.

When Service NSW came into being, it shifted delivery culture from long call centre wait queues to callback windows nominated by users. It was a tearaway hit.

By contrast, Centrelink’s progress is being measured by the reduction in clients getting busy signals.

The road to reform is well lit. The question, it seems, is the will to follow that road.

New South Wales has its challenges, but nostalgia for long queues is not one of them.

“One of the hardest things to do in government is to cut across the silos and to build events inside them,” Dominello says.

Hard, but not impossible.

Whether Services Australia can deliver on Martin Hoffman’s review will be the litmus test.