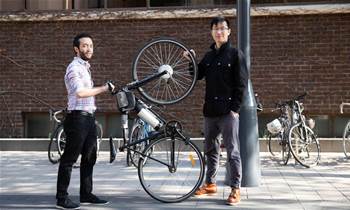 Cyclists, whether they be food delivery riders or MAMILs, are infamous for doing everything they can to conserve their hard-won speed, even if it means running a red light or careering into the way of pedestrians on the footpath.

But new work from IBM Research Australia and RMIT’s Exertion Games Lab, however, is looking to avoid tiresome stops or dangerous behaviour by using artificial intelligence (AI) to catch the ‘green wave’ of traffic signals.

It's well known many cyclists jump traffic signals or make legally questionable deviations to maintain momentum getting from A to B. If you're an underpaid international student under Dickensian food delivery conditions, there's simply no other way.

In a project dubbed ‘Ari the e-bike,’ the researchers used traffic data and 'green wave' modelling from VicRoads and internet of things (IoT) technologies to help the rider regulate their speed to match cycles of green traffic lights.

Green waves are when sequenced traffic lights work in your favour providing a clean run.

Following trials in real traffic conditions on Melbourne’s streets, they calculated the optimum speed to have the greatest likelihood of crossing all lights on green at the test location was 22km/h.

Ari was then programmed to assist riders in meeting this speed by offering more engine support to accelerate, and using bone-conducting headphones to tell riders to “slow down a little” (leaving the riders’ ears uncovered to maintain awareness of their environment).

“Through this research, we can begin to explore what it means for humans to partner with AI
systems and how we can design these systems to support user interaction by being
trustworthy, explainable, to ultimately explore futures that could make a societal
contribution,” said Josh Andres, human-computer interaction researcher at IBM Research Australia and RMIT PhD candidate.

Andres’ other work at the Exertion Games Lab also focused on ‘Ava the e-bike,’ aimed to make e-bikes more playful and responsive to riders’ movements by flashing lights when wobbles were detected or accelerating when the bike sensed a rider leaning forward.

While there are no current plans to explore deploying Ari (who one of the trial participants called a “cyber-horse”) into other traffic environments, the researchers said the technology could be useful in real-world applications, provided there’s access to sufficient traffic light data in each jurisdiction.

However, the experiment does lay the foundations for more user-machine interfaces with everyday applications, especially in contexts where screens like smartphones aren’t an ideal medium to relay information to the user.

Eric Zhang, electrical engineer at the RMIT Exertion Games Lab and contributor to the project, added that “the development of reliable and explainable AI could open opportunities where these types of systems can serve as human ‘coaches’ by complementing physical effort and offering extra cognitive abilities.”