VR gaming headsets used to target concussion on the field 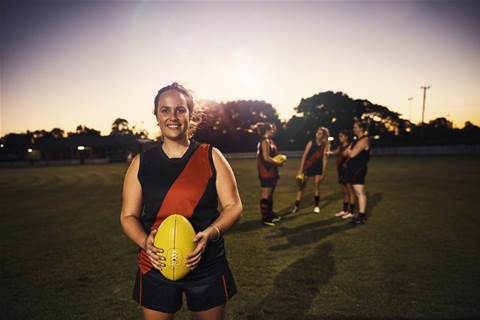 New research at Sydney’s Macquarie University is exploring the use of consumer-grade virtual reality technology to quickly measure the impact of concussion in contact sports from the sidelines.

Concussion can be difficult to accurately identify and measure as it presents with a wide range of symptoms, making it harder for coaches to know when it’s safe to send players back onto the field.

The study has kicked off by looking at the neural activity of a dozen healthy players from the GWS Giants AFL team and 60 cross-code players from the university’s amateur football teams using commercially-available VR goggles and electroencephalography (EEG) hardware.

The portable setup shows players a series of black and white flashes through the goggles and measures the corresponding electrical activity in the brain.

“The brain is very neat in that if a healthy brain is presented with a visual stimulus that’s very regular, such as lights flashing at set intervals, the brain will adapt and fire at a similar rate,” Dr Bianca De Wit, one of the project leaders, said in Macquarie’s Lighthouse publication.

“But if an athlete has a concussion, we expect the brain to be less responsive.

“Using technology, we can objectively test the integrity of the visual pathway after a concussion.”

The accelerometer in the VR rig is also being used to measure players’ balance “to get a real objective and more complete measure of what the effect of a concussion on the brain might be,” De Wit added.

All up the VR headset and Emotiv EEG being used in the concussion trial only cost around $1000, and it’s a lot more flexible than setups currently confined to labs and hospitals that cost around $50,000.

“Most people don’t actually make it to the lab or the hospital for tests because they either carry on playing or don’t feel well and go home to lie down. Our research allows us to take the measurement right there on the sidelines.”

The players in the study will be tracked throughout the season, with the next phase of research looking at the brain activity of concussed players for comparison.

Both male and female players are participating in the study as well, giving some of the first insights into how concussion impacts women in sport.

“The rise of female participation in contact sport is very important from our point of view, and we should pay attention to a potential difference between male and female athletes,” De Wit said.

Importantly, she added, the research team aren’t looking to have players kept off the field long-term following an injury.

“There's been a lot of media coverage around the risks associated with contact sport but our research isn't about stopping players from playing. It's all about making it safer. It's making sure a player is pulled off the field, has a proper rest and doesn't get a secondary knock.”

Retired professional players are currently being sought for phase two of the study.