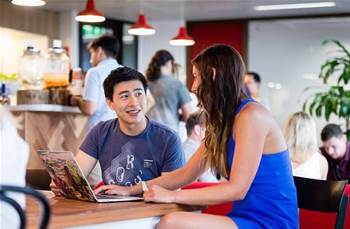 Administrators at collapsed major IT recruiter Rubicor Group have painted a bleak picture of the company’s affairs, estimating it likely traded as insolvent for more than two years before being sin-binned by the ASX for failing to produce financial accounts.

And now the Australian arm of Google has been roped into mopping up the mess.

Information released to frustrated creditors late Tuesday by administrator FTI Consulting estimates that Rubicor “was likely insolvent as at March 31 2017” right up until corporate undertakers were called-in on August 5th 2019.

The length of likely insolvency is certain to send shudders across the technology recruiting and contracting sector.

Rubicor’s major clients include Google, the Commonwealth Bank, National Australia Bank and the federal government, all of whom are meant to sniff for dodgy labour hire practices. Like not paying superannuation.

Rubicor’s collapse is somewhat of an anathema – especially when its nearest rivals like HiTech are booming and buying-up book.

The focus of investigations over how the company was driven into a wall in the midst of one of the biggest boom markets for tech recruiters is now certain to focus on its board, with FTI Consulting observing that offences directors “may have committed” include insolvent trading and non-payment of outstanding superannuation.

According to the creditor’s report, the biggest spenders with Rubicor’s tech subsidiary Xpand Group when it hit administration were Google, spending almost $7 million a year, Gumtree $4.1 million  and eBay on $2.8 million.

However Google has since ripped up its contract, with administrators saying the search giant had cited “concerns over Xpand’s prior conduct surrounding employment obligations and the impact on market perception as a key driver for the termination.”

“The administrators continue to liaise with Google and assist in the orderly transition of 55 contractors to an alternate provider,” the creditor documents say, noting Xpand continues to trade under administration.

Signs of major trouble in Rubicor surfaced in between late 2018 and early 2019 when Telstra, the Western Australian Government, Yahoo7 and Coca Cola Amitil tore up contracts with the firm.

In March 2019 Tesltra dropped Rubicor like a hot potato after deficiencies in superannuation payments to contractors surfaced, prompting union agitation.

Bleeding major customers, the company went into a revenue nosedive as it tried to fend off the Australian Tax Office at the same time as unsuccessfully juggling its superannuation liabilities.

“Unpaid superannuation of contractors across the varying entities contributed to over 40 percent of trade and other payable in FY19 (totalling $22.5 million),” Rubicor’s creditor’s report said.

“At the date of appointment, the total principal superannuation outstanding for the group was approximately $10.3 million (excluding ATO interest and administration charges).”

Intriguingly, digital services contractors at Xpand appear to have gleaned a slightly less dud deal compared to their peers in other Rubicor subsidiaries.

The investigations report to creditors notes that Rubicor “appears to have prioritised paying superannuation for employees of Xpand”.

This graphic tells the tale of the super liability tape: 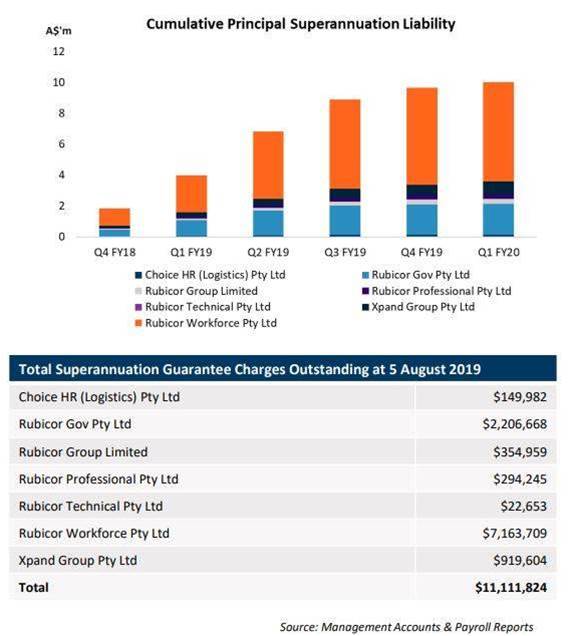 The least painful road forward, according to the corporate autopsy, is for creditors to accept deeds of company arrangement (DOCA) proposed by Polygon Talent Limited, a private capital play that wants to pool Rubicor’s debt into a single fund.

Polygon’s offer would pump $10.5 million into Rubicor over five years, preserving what’s left of the company to pay out debts as opposed to liquidation that would likely net out in single digit percentages.

The capital injection and new owner would trade the company out of its malaise, the proposal goes. Two other tyre-kickers bid at the fire sale, including present shareholders, with the administrator batting them away.