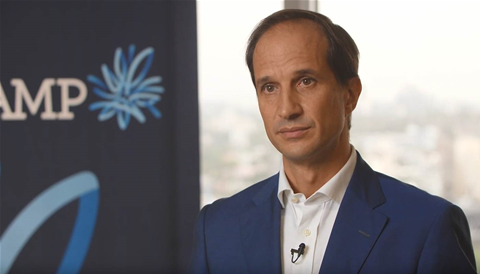 Beleaguered financial services giant AMP has tapped the market for a $650 million capital raising to help it restructure the business into a customer-centric and technology-led financial services provider, including a core banking system lift, under a major strategic shift on the back of a $2.3 billion loss for the second half.

The head and shoulders of the highly anticipated new strategy from AMP’s new chief executive Francesco De Ferrari is a $1 billion dollar business transformation project that aims to unify its previously discrete business units into a super, investment and retail banking one-stop shop.

The transformation will be underpinned by another major tech revamp that includes a restart for the previously paused new core banking system, “digitally enabled”  wealth management products that are almost certain to incorporate robotic advice, costed at $350 million to $450 million “investing in growth” fund pool.

At the same time, AMP will sink another $350 million to $450 million into a cost improvement project to extract around $300 million a year in expenses by rationalising its various tech stacks, throwing more tech at operational efficiency and simplifying and improving processes.

The big rebuild will take around three years and will “pivot” the business to a ‘horizontal’ structure rather than a series of siloed verticals, some of which like AMP’s life insurance business are being offloaded.

The future state of AMP as painted by De Ferrari will be a single customer information environment where they can execute day-to-day banking and manage their investments that traverse ‘whole-of-wealth’ - starting with peoples’ first job, access to debt (mortgages), growing assets and protecting investments.

De Ferrari said while the whole-of-wealth institutional business was well accepted overseas, it was largely new to Australia. He also talked up the potential to take on major retail banks, many of which are now largely exiting financial advice and insurance after copping a beating at the Royal Commission.

“We are fundamentally going to change the business model,” De Ferrari said. “We have a huge opportunity in retail banking,” adding that in wealth AMP needed best of breed products delivered to customers through technology.

“AMP starts from a strong technology foundations,” De Ferrari said, then noting that the problem was that good achievements were stuck in “vertical silos” across the business, a fragmentation effect that had helped chalk up a wincing cost-to-income ratio of around 60 percent in wealth and capital.

De Ferrari insisted that digital delivery, customer service and automation across areas like compliance needed to go right across the organisation.

“[AMP] has to be much more of a data and technology led business,” De Ferrari said, saying these were part of “building the new AMP”.

“These are big missions."