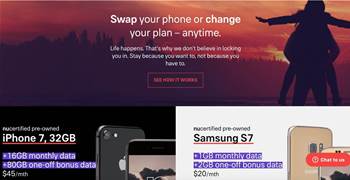 Nu Mobile has quietly launched into the market with reconditioned iPhones and Galaxy devices, a chance to swap devices anytime, and the ability to rollover included data up to a 200GB limit.

The new mobile virtual network operator, which is owned by Macquarie Group, was first revealed back in April.

However, little was known about Nu Mobile at the time, aside from its model: that it would bundle a SIM with a pre-owned smartphone that Macquarie Group previously leased to other companies.

The company has now revealed its offers into the market.

It will offer Apple devices - iPhone 7, 8 and X - along with Samsung Galaxy S7 and S8s.

They can be purchased outright or paid for over two years interest-free, and come with a 12-month warranty.

In an innovative feature, Nu Mobile will allow customers to either return their handset or swap it for another one at any time.

It will “buy back” the handset even if the functionality is “significantly impaired” upon return, though the valuation will be a percentage of the balance left owing on the handset.

A SIM plan then needs to be added: these start out at $10 a month with unlimited calls in Australia and 1GB of data.

For customers that agree to pay $30 or more a month, Nu Mobile will add a one-off 80GB of data that can be used anytime.

One of the features of the larger plans is that unused data rolls over each month, to a maximum bank of 200GB, Nu Mobile said.

The company said it had access to “parts of Telstra’s 4G and 3G network” to deliver its services.

It has published a coverage map that allows users to drill down on which part of the Telstra network they are covered by.

Nu Mobile said it is still working on a "simple and affordable roaming package" but that users were better off buying a local SIM if they went overseas with their phones.

The company said it performed a "51 point check" on all reconditioned handsets, making sure they were operational and that previous data was deleted.