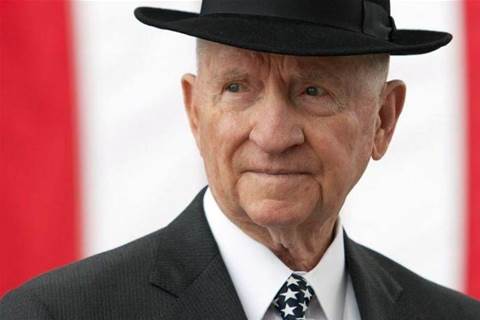 Founder of two IT services heavyweights.

Electronic Data Systems (EDS) founder and two-time US presidential candidate Ross Perot has died at his home in Dallas at age 89, his family said.

Perot founded EDS in 1962, a company which would go on to sign significant tech outsourcing deals with the Commonwealth Bank of Australia, the Australian Tax Office, Customs, and a whole of government deal with South Australia.

A monolithic beneficiary of the 1990s trend for corporates and government to divest their technology assets and strategy to save costs, EDS’ notable US clients have included the NASA, the American Medicare system, and other government entities.

Most government agencies and large corporates now agree that the push for wholesale IT outsourcing, including IT strategy, across the 1990s and early noughties went too far and ceded too much control to vendors.

Australia's federal government, in particular, conceded that it lost internal capability through trying to outsource strategy, a move that several agencies successfully resisted.

Unconquered mega agencies included Centrelink, Medicare, and Defence, with even the prospect of outsourcing payments processing at Medicare the subject of the hostile 'Mediscare' election campaign in 2016.

The Texan billionaire sold a controlling stake in EDS to General Motors in 1984 for US$2.4 billion, before forming a separate reseller dubbed Perot Systems four years later.

Perot Systems would be sold to Dell in 2009 for US$3.9 billion, while EDS would go on to be acquired by Hewlett-Packard for US$13.9 billion to form part of its services division, which would provide the groundwork for later ventures including Hewlett-Packard Enterprise and a merger with Computer Sciences Corporation to form DXC Technology.

In the 1990s, Perot would use his personal fortune to largely self-fund two runs for White House, in 1992 as an independent who captured 19 percent of the vote, and in 1996 as part of his Reform Party, although he would only receive eight percent of votes that year.

Perot’s interest in computers was sparked during his time with the US Naval Academy, from which he graduated in 1953.

After his naval service, he joined IBM as a computer salesman in 1957. Reuters reports that by 1962, he had made a name for himself by meeting his yearly sales quota by January 19.

A family spokesperson said in a statement that Perot was a “ground-breaking businessman and loving husband, brother, father and grandfather,” who passed away in his home surround by family.

The spokesperson added that leukemia was the cause of death.