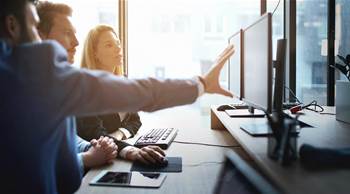 To fuel its own NBN-powered growth.

Macquarie Telecom will use NBN Co’s wholesale price review to press the case for more business-oriented services capable of speeds over 100Mbps in outer metro and regional areas.

Group executive Luke Clifton told iTnews that MacTel’s customers were “extremely interested in speeds and feeds above 100Mbps”, particularly outside the major CBDs.

Clifton said the space was traditionally dominated by “Telstra and the other big Tier-1s”.

“I'm very interested in having a look at the price points for those services in those particular areas because that's what stimulates competition in those areas for customers that we would traditionally not be able to go and compete for,” he said.

A year has passed since MacTel struck its first direct deal with NBN Co.

Clifton said the first year had seen the company win some accounts that it previously had been unable to pursue.

“If you consider the Macquarie Telecom model, we really don't have any infrastructure that does that final mile between our points of presence and where the customers were,” he said.

“We were always somewhat beholden to the other Tier-1s in terms of the wholesale pricing model to the technology that we needed to get access to.

“it basically meant that in the past we could really only compete where there was wholesale competition. That restricted us to capital city CBDs, and that's where the majority of our customers were.

“A year on, we've been able to compete for far more customers than we would have been able to in the past, both in terms of the size and scale of those enterprises.”

Clifton cited wins at Officeworks and Regional Australia Bank among deals it had been to secure with a combination of NBN-based access and additional services - such as SD-WAN or SIP voice - layered on top.

“These are customers we wouldn't normally have been able to compete for, because some of their sites at a wholesale level would have been price uneconomic for us to be able to bid for,” Clifton said.

Clifton said that “new pricing regimes that have been rolling out from NBN Co over the last year, specifically for the higher speeds of TC-2 and Enterprise Ethernet”, partially contributed to Macquarie Telecom’s successes.

He anticipated further downward pressure on prices in the corporate market as NBN Co continued to expand its Enterprise Ethernet product.

“The price points of Enterprise Ethernet that are coming into the market over the next six months are going to be game changing for the type of application performance that people can expect in areas that they probably haven't had it before,” Clifton said.

“That's that's going to be a very interesting play over the next 12 months or so as you see wholesale price points drop and technologies like SD-WAN sitting on top.”

He said that Macquarie Telecom is “acutely interested” in TC-2 fibre pricing and “anything [related to] Enterprise Ethernet” that could come out of the current NBN wholesale pricing review - and that the company would contribute to the process.

On SD-WAN, Clifton noted the technology is a dominant feature of new data network deals.

“In Australia, we launched SD-WAN just on two years ago,” he said.

“In the last financial year, we sold 107 brand new data networks to brand new customers - 105 of them were SD-WAN deployments, only two of them were in MPLS.

“It is the only conversation that we're having with customers.”