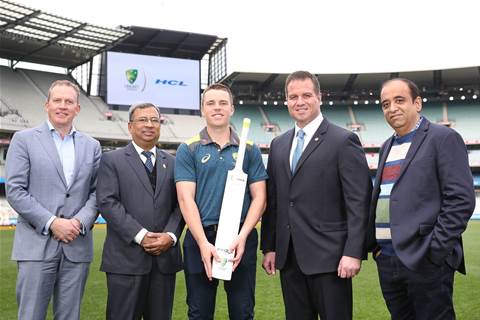 Plans to integrate digital experiences and then explore AR and VR.

Cricket Australia has signed Indian technology solutions provider HCL as its new digital partner and the pair will work together to develop new personalised experiences for fans and volunteer administrators and then explore augmented and virtual reality to offer new experiences.

HCL replaces Accenture, which has worked with Cricket Australia for the last five years.

“They’ve done a terrific job for us,” said Mike Osborne, Cricket Australia’s general manager of technology. “But when we when we released our new cricket Australia strategy, we took the time to do a new digital tech strategy.

"And as part of that, we thought the time is right now to go back out and look across the market on and who might want to work with us. Accenture did a great job. It was just that time in our evolution, it was time to look and see who else was out there.”

“Right now we tend to go to our fans and participants on a product-by-product basis,” Osborne said.

“What we envision is an integrated platform and an experience that means the most to them.”

Osborne and HCL executive vice president and country manager for Australia and New Zealand, Michael Horton, both said the new partnership will see those products integrated so that users don’t need to move from one to another.

“We have a number of ways people engage with us,” Osborne told iTnews.

“Individually, each of those properties is quite good. But what we're not doing is stitching that experience together and recognising that it's you and that you have a number of ways you’re connected to cricket.”

Doing so won’t mean major re-platforming for Cricket Australia, Osborne said. Integration and security are higher on his agenda.

“It starts with identity. It is our obligation to protect the information we've got. Participants or fans own their own identity, choose where it is shared around Australian cricket.”

On the technical side, he said HCL’s challenge is “how do we modernize that to an API-driven platform that will allow us then to connect the different capabilities together into a stitched-together experience that can flip from asset to asset and property to property, depending on how the individual is engaging with us.”

HCL’s vice president for digital and analytics Sachin Bajaj said the company will use agile methodologies for its Cricket Australia work, and that after the current products have been migrated to a new platform work will begin on enhancements.

“We have three core pillars,” he said, “Fan and community engagement, AR and VR to take the stadium back to the fan in their house, and security.”

“We have the opportunity to do much more with the broader community. Today you communicate a score, a match update. We do not communicate the life of a cricketer. That is when fan engagement becomes true engagement.”

HCL is an Indian company renowned for its offshoring work. But much of the work on this project will be done in Australia.

“We used to move a lot of people onshore and offshore, which we don't do any longer,” said HCL’s Horton.

“Some of that came about thanks to visa changes, but at the same time the delivery practices change to meet Agile development methodologies. So you needed a solid team onshore and there’s a lot more local hiring - more than 50 percent of our staff in Australia now and locally.”

“In the past, our [Australian] offices were predominantly sales and support. Now we have offices that have delivery people in the offices as well as development people in there as well.”

The developers are needed onshore because agile methodologies require frequent meetings among stakeholders. And HCL needs people to be in the room to make those meetings happen. Some work will still be done offshore, but Horton said those resources sometimes now use on-all-day video streams that come closer to an in-office experience.