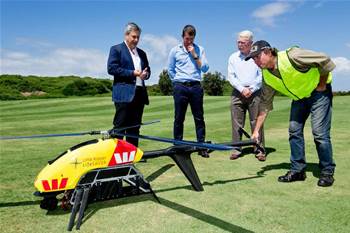 Beach safety drones in NSW have had a few upgrades since they first launched in 2016, including being spun out into a separate company called Ripper Group and the addition of automated shark detection thanks to artificial intelligence-powered software.

Now the drones are set to have additional AI smarts to help lifeguards keep beachgoers safe by automatically identifying the signs of a swimmer in distress.

“There are only a very limited number of behaviours that have been captured by lifeguards and experts that illustrate someone is in distress,” said professor Michael Blumenstein, a core member of the University of Technology Sydney’s Centre for Artificial Intelligence and a collaborator on the drone project.

“It’s actually quite good that there’s a finite number of distress patterns a lifeguard will look for in the ocean - that gives us a good, limiting scope analyse the video and look for people that just exhibiting that distress,” Blumenstein told iTnews ahead of his presentation with Ripper Group at the AIIA’s Navigating Artificial Intelligence Summit in Canberra later this week.

This capability, and the ability for the SharkSpotter app to differentiate 16 shark species from dolphins and clumps of seaweed with 90 percent accuracy, is largely thanks to improvements in the quality of data coming from high definition cameras.

Blumenstein, who’s been working on AI’s ability to recognise objects and patterns for more than 20 years, said the machine learning algorithms behind the object recognition had changed remarkably little in that time - it’s the enhanced quality of data and the immense volume of it now that has sped up development in recent years.

And given that the models used to spot sharks can already identify sharks at different times of day, in a variety of weather conditions and changing water quality, getting the drones to spot humans struggling in the water shouldn’t be too much more difficult.

Blumenstein said early trial results are so positive a distress spotter could be deployed in six months - in time for peak beach season (although he admitted that would be cutting things a bit fine).

“But to be honest, I think we’ve got the ingredients now, we’ve got the technology with the algorithms, we’ve got the experience in using the drones with video in difficult and challenging environments. So actually I don’t think it’ll be that long.

“Six months is cutting it very fine, but a year, I think that’s possible.”

Like most automation projects, the creators are quick to say it won’t reduce the human headcount, but will instead augment their capabilities. Surf lifesavers will still be needed to scan the beach, talk to swimmers, and rescue them if necessary.

But what Blumenstein hopes is that the drones will give them another tool to survey more water in less time, and with significantly reduced overheads compared to helicopter or plane surveys of the water.

“At the end of the day, these are recommendations given to expert lifesavers.”

Those recommendations, so far with sharks, have proven 70 percent more accurate than what lifesavers can spot from the tower through binoculars.

But the final call on whether to act on the drone’s suggestions and how best to proceed was always left to a human, and that will be the case with the distress spotter.