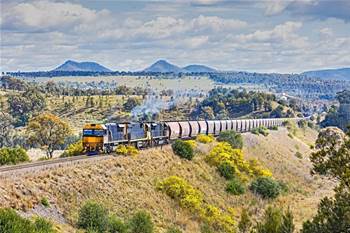 Railway researchers Central Queensland University’s Centre for Rail Engineering (CRE) have had to turn to high performance computing clusters after their desktop PCs failed to keep up with the complexity of their data simulations.

The CRE has been tasked with advancing train dynamics knowledge to better understand how the forces of hauling goods across Australia impact on the nation’s billions of dollars worth of wagons, locomotives and rails.

Recent work has combined software simulations with a trove a data collected by rail manufacturers and operators collected during the development of new products, a monumental task which could take up to eight months to complete on the researchers' PCs.

Now the CRE can turn that data into easily-digestible simulations using the university’s HPC clusters in as little as three days, running on 400 out of over 500 available cores.

One of the key components for simulations is CRE’s Longitudinal Train Dynamics Software (CRELTS), which has been continuously developed since the centre’s first dynamics management project in 1994 to gather and present data.

It can analyse and evaluate whole-of-trip performance under varying conditions including load size, train length, power and breaking to deliver reports on the best way to balance fuel, speed compliance, safety and travel times without over-working physical infrastructure.

The CRE team then couples this data with GENSYS simulation software to complete comprehensive analyses of the train-locomotive-wagon-track system and provide improved advice to industry on rail and wheel dynamics and wear.

Small gains in efficiency have a huge impact in Australia’s rail enormous railway ecosystem - freight operator Aurizon revealed last year it had saved $380 million in three years by deploying internet of things sensors across its fleet to maximise fuel efficiency and transition to a data-driven preventative maintenance roster.

CQU’s enhanced ‘what if’ tool, however, will contribute to rail safety standards across all of Australia by informing new initiatives at the Australian Rail Industry Safety and Standards Board.

The Australasian Centre for Rail Innovation has also leaned on CRE’s simulation capabilities in a 2018 review of track defect management processes.

A further project with the Australian Transit Safety Bureau (ATSB) has been greenlit to use CRE’s expertise to delve into unsolved issues the ATSB is continuing to investigate in a 2008 train derailment near Winton in Victoria.