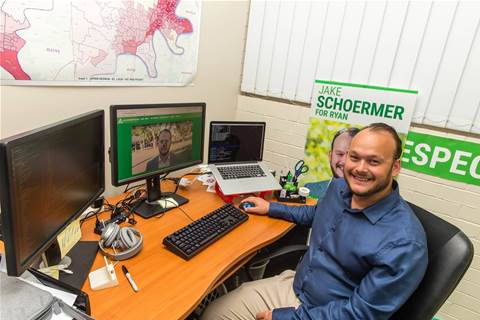 Against the odds, Ruby developer and start-up founder, Jake Schoermer, keeps his federal election campaign hopes on the rails.

Jake Schoermer scythes through the electoral material swamping his desk that is dominated by a three-screen array filled with code, pulsing Cooler Master gamer’s keyboard and trackball.

Hanging above the coder’s den is a huge map of the sprawling 370 sq km Federal House of Representatives electorate of Ryan in Brisbane’s west he’s contesting for the first time, reminding him of the impossibility of door-knocking every constituent in the affluent seat.

“At the last state election, we knocked on 20,000 doors and we’re on the way to achieve that in this campaign,” says Schoermer, who stood for the Greens twice before in state elections that narrowed the gap with the major parties. Ryan has more than 106,000 voters.

His campaign office above an Indian restaurant on the bustling High Street of Toowong, 5km from Brisbane City Hall, is packed with Greens election paraphernalia — corflutes, whiteboards, flyers, signs, pop-up marquees in travel soft cases and a hundred other items.

Schoermer, 28, a ‘full-stack’ IT developer and start-up founder, was inspired to get into politics soon after leaving high school when fixing a city councillor’s PC.

He was unimpressed at the councillor’s apathy to poor public transport in Karana Downs near Ipswich just outside his electorate, and thought he could make a difference.

As he pours himself into a tired, donated sofa (“The only condition was I can’t give it back”), he likens his campaign to a bootstrapped start-up with PCs, printers and other begged and borrowed equipment operated by volunteers seated at chipped desks and on sagging office chairs.

In a corner, near a trio of resurrected Dell Ubuntu Linux laptops, lies Schoermer’s current gadget project — a Raspberry Pi awaiting a case he’s 3D printing for it.

And like a bootstrapped start-up, money is tight. Schoermer’s biggest donor is his mum, who is of modest means, and since he can’t outspend his opponents he must outsmart them.

And although he’s the endorsed Greens candidate in Ryan, Schoermer says he’s also the campaign’s IT helpdesk.

As a full-stack developer in Ruby on Rails, AngularJS, PHP and Wordpress, he works for a Brisbane shopping comparison website. If elected, he hopes to inject some tech reality into Canberra on issues such as the Assistance and Access Bill (#AABill) both major parties rammed through before Xmas, and the “train wreck” NBN rollout.

“We should have just built fibre to people’s homes and … we wouldn't find that half the copper in ground is not fit for purpose,” Schoermer says. “And there were issues with … poorly trained contractors not talking to each other that means every customer will have a poor experience.”

In a gripe familiar to many small IT businesses, poor internet frustrated his consulting work developing client websites.

Although long a Ryan resident, Schoermer has no illusions about snagging the seat.

Drawn in 1949, Ryan was held by conservatives for all but a few months after the 2001 by-election when John Howard’s Liberals plumbed their lowest depths of popularity and Labor temporarily held it on a +9.7 percent swing. The LNP now holds it on a margin of +9.0 percent.

But he senses a shift in sentiment on the ground.

In the past 18 months, local issues including citizen resentment at the LNP-controlled Brisbane City Council over environment planning matters — and 25 years of chipping away at the majors’ primary vote — gives the Greens their best shot at what could be a spectacular upset in the poll.

Even if he doesn’t win, Greens preferences could unseat the LNP for the first time at a general election in Ryan. Although the seat has at its heart leafy St Lucia (University of Qld) and Fig Tree Pocket (home to Megaport founder Bevan Slattery and United Australia Party’s Clive Palmer), following a recent redistribution it has Labor-leaning Enoggera in the north and the rapidly developing, semi-rural and flood-prone Bellbowrie some 25 kilometres south.

And unusually, Schoermer faces no incumbent this time because Ryan has only a nominal MP in Julian Simmonds, 26, who was overlapping Walter Taylor ward city councillor before dislodging his former boss, assistant minister and federal LNP MP Jane Prentice, in a rancorous pre-selection last May.

Many locals associate Simmonds, formerly chair of city planning, with a benighted plan to string a contentious 1500-meter-long zipline through the treetops of Mt Coot-Tha that would have felled hundreds of trees and disrupted the serenity of the popular nature’s playground.

The peak that holds the city’s transmission towers and has a botanic garden at its foot commands the western skyline and is held sacred by residents and the Indigenous Turrbal Nation. The failed zipline that council spent $300,000 over 18 months promoting enraged residents who crashed its website filing an unprecedented 3600 submissions (90 percent objections). Coincidentally, council scrapped its zipline on 11 April — the day Liberal Prime Minister Scott Morrison called the 18 May federal poll.

“I take that as a sign we’re [the Greens] having an impact,” Schoermer says.

“I don't think people are impressed with his [Simmonds’] approach to development in this community and they feel like they haven't been listened to. I definitely think it has helped me and I've met a lot of traditional lnp voters who were very concerned about that issue and base their federal vote on the stance of the candidates” to environmental issues.

In another jab at Simmonds, a career politician who went into politics after graduating journalism at the University of Qld, Schoermer contrasts their political journeys.

“I made the conscious decision … never to give up my day job [as an IT developer] for a [political] staffer role. You want politicians to have [business and] life experience.”

On the hustings at the pre-poll booth

At the pre-polling centre that has popped up at a nearby shopping strip, Greens co-deputy leader Larissa Waters arrives to lend Schoermer her support. Waters is quick to point out that Greens state MP Michael Berkman took the seat of Maiwar, which largely overlaps the federal seat of Ryan, at the last Queensland state election.

Waters says Schoermer’s technological savvy would be a powerful, additional voice for IT and innovation since WA Senator Scott Ludlam’s departure and would bolster in the Lower House the work of WA Senator Jordon Steele-John who assumed Ludlam’s brief on technology issues.

While the fight for Ryan occupies his energies, Schoermer has ideas on how to make an immediate impact should Ryan voters send him to Canberra.

“I’d hope to get on the IT and communications committee. My expertise in technology is far above the average mp; I could influence a lot of debates,” he says.

“[And] I’ll try not to fix everyone’s PC and try very hard not to write software in the Chamber.”

So how does tech inform Schoermer's politics?

NBN – “We should have just built fibre to people’s homes and … we wouldn't find that half the copper in ground is not fit for purpose.”

Future of work – “A lot of people like the freedom of being an Uber driver but one of my concerns is the potential to make very little money once expenses are taken in account. I just want to make sure that if you go for an eight-hour shift, you'll make a living at it.”

Problem-solving – “I have a [software] engineer’s approach — it can be a big problem, and I may not know all the answers but, like when you start a software project, you know the end goal and you problem-solve your way from A to B and work out what resources you need.”

#AABill – “The challenge is to balance civil liberties with security. The politics meant Labor capitulated and supported it [when] there was no case to rush those laws through. The idea that you would put backdoors in encryption is insanity. There are considerations for customer information if the government can insist on backdoors that will definitely hurt Australian businesses operating in a global market.”

Innovation – “We’re keen to see Government support for a local games industry – it’s been a patchwork of policy approaches that made it hard for Australian videogames companies to grow and thrive.”

So what are the Greens technology policy spending priorities?