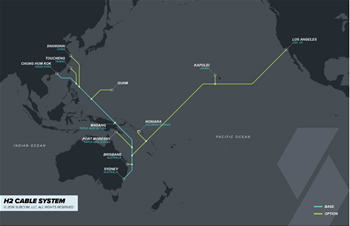 Onwards connections to China and the United States.

Australia's connectivity with Asia looks set to receive a multi-terabit per second shot in the arm as the Singapore-based H2 Cable company signed up Subcom to supply and install a data circuit spanning Sydney to Hong Kong, and onwards to the United States.

The cable will have branching units so that spurs can be added to reach Taiwan, Papua New Guinea, Solomon Island, Guam, Queensland, and Hawaii.

H2 chairman Remi Galasso who drove the build of the recently completed Hawaiki cable system that connects Sydney to Hillsboro, Oregon via Mangawhai Heads, New Zealand, told iTnews that the total cost of the H2 project is expected to be US$380 million.

The H2 cable will land at Coogee Beach in Sydney, and near the LAX airport in Los Angeles. A landing site in Hong Kong is yet to be confirmed, Galasso said.

New subsea cables are being laid between Australia and Asia currently. This includes the Australia - Singapore Cable (ASC) and Indigo from Perth.

Asked why he's embarking on another cable project so soon after Hawaiki was finished, Galasso said there's burgeoning demand for data capacity currently.

"Need for connectivity is literally booming, Australia's main international route is still Sydney - US, served by three systems including the Hawaiki Cable; but the route from Sydney - North Asia is probably underserved and we believe a direct cable Sydney - Hong Kong is exactly what market will need in the coming years, which is the reason for H2," Galasso said.