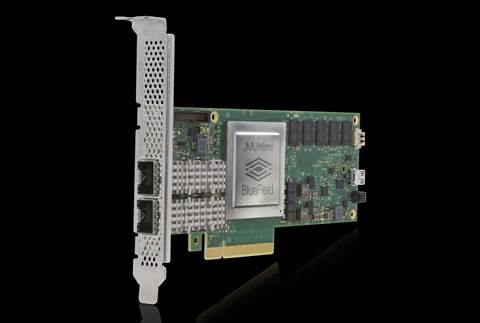 Yes, a network card, for very edgy use cases.

VMware has demonstrated Linux running on a network card.

The SmartNIC is a product that does all you’d expect of a network card (NIC) but also includes a system-on-a-chip (SoC) that packs an ARM CPU to handle other tasks.

The thinking behind SmartNICs is to have the NIC perform some networking-centric chores – think running a firewall, performing encryption or grooming traffic to interact with storage arrays – and by doing so relieve the CPU of the need to handle those chores.

VMware thinks the SmartNIC is also a great place to run workloads on the network edge where data is generated. Wolf observed, as have many before him, that it is too costly and slow to move all the data gathered at the edge to a cloud or data centre.

Many workloads, Wolf added, are smaller than the data they analyse. Which means it is more efficient to move software to the edge to work on data than it is to move data to a server in a public and/or private cloud.

And seeing as anything that can go online needs networking hardware of one sort or another, VMware thinks it is a viable idea to send workloads into that hardware.

Wolf advanced two reasons for running workloads on NICs. One is to do network-centric chores, such as securing a virtual network. Another is to allow third parties access to data. He postulated a situation in which a large retailer wishes to offer a partner access to data without letting them too far into core systems, so instead lets them run a workload on a NIC.

Such arrangements could offer a novel software deployment option or, he said, provide a way for a partner that adds value to data to access in the nicely-isolated “place” that is a NIC, rather than needing a deeper link to an application or data store.

The demo ran ESXi on ARM, VMware’s recently-announced port of its flagship hypervisor to the ARM architecture . The company created the product because it believes that users will want virtual machines to run in lots of hardware other than Intel-powered servers.

VMware also believes users will want one management tool – its own vCenter – to control what VMs end up running across a fleet of devices, whether they are powered by Intel or ARM silicon.

Until today, the company had demonstrated ESXi on ARM on ARM-powered servers, some lesser machines and even the Raspberry Pi. The SmartNIC demo signaled an entirely new direction.

Wolf didn’t offer any information about whether the NIC demo would go into production any time soon, but did say customers have already expressed an interest in this kind of model.