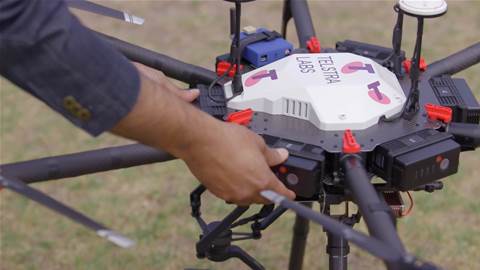 Look out, they’re on the LAAM.

The duo jointly prototyped the Low Altitude Airspace Management (LAAM) system to help manage the explosion in commercial and recreational drone use, which Thales Australia chief executive Chris Jenkins predicted will increase from thousands of flights per day to millions.

Drone operators can use data and communication platform create a unique identity for themselves and their UAVs on the system, and then lodge flight plans for authorisation.

An automated rules engine then approves or rejects the plans, reserving the airspace to avoid run-ins with other drones in the area.

Once approval for missions has been granted, drones are tracked in real time to ensure compliance with operating regulations, with operators notified if breaches occur of if developing emergencies mean flight plans have to be altered.

After a mission is completed, LAAM then frees up the airspace for other drone operators to use.

LAAM is underpinned by Telstra’s digital communications networks, with the telco exploring the role 4G, 5G and internet of things technologies could play in enhancing drone navigation and monitoring efforts to make low altitude flights safer.

And on top of GPS data coming from the drone, Telstra’s network adds a second layer of location validation.

Thales is no stranger to drone management, revealing in September that it would be equipping an anti-UAV solution into its electronic warfare platform deployed on Bushmaster defence vehicles.

It’s also supported research at RMIT University to develop the aerial version of a dead man brake system to safely take control of an aircraft if a pilot becomes incapacitated.

Telstra has flagged that LAAM could one day also incorporate machine learning and artificial intelligence for event-based policies and regulations, which could be useful for police forces who have already mounted anti-drone operations for events such as the Gold Coast Commonwealth Games.