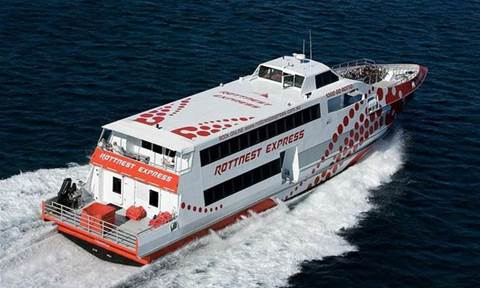 Austal, the Australian defence and fast ferry shipbuilder, is in the “proof of value” stage for an IoT system aimed at reducing fuel consumption and improving ride comfort for passengers.

The company, based in Henderson in Western Australia, is running trials of the system with three operators using its ships: one each in Perth, the Canary Islands and the UK.

Austal has built its own physical sensors for the trial and is using mostly AWS technologies in the backend to ingest, store and analyse the data received from the ships.

On the AWS side, it is an early Australian user of a service called SageMaker which is designed to make it easier to build, train and deploy machine learning models.

Technology development manager Max van Someren said the IoT project came as a result of a desire from Austal to “transform ... into a technology company”.

Its fast ferries already have on-board technology systems to an extent, including a ride control system aimed at passenger comfort as well as a SCADA-based monitoring and control system “which brings all the information from all the different equipment around the vessel into one display, which is then presented back to the ops team on the bridge.”

But it wanted to find new ways to improve two key aspects of ship performance.

“One is fuel consumption. If you can minimise the amount of fuel used - these are gas guzzling vessels - then you're going to drive down costs and improve margin for customers.

“The other side of the equation is improving revenue performance by improving the motions of the vessel. This is really, really important, particularly on ferry routes where our customers are in competition with airlines and other ship operators.

“They need to be able to achieve high revenue from things like the sale of duty free and bar sales, which can only happen if people can get up out of their seats and feel comfortable enough to walk around.”

A year ago, Austal started work defining the characteristics of the dataset it hypothesized it would need to achieve those two performance objectives.

“There's about 100 different data points which we need in order to be able to predict fuel consumption and [give enough information to the] crew of the vessel to change [settings] in order to improve the outcomes and the impact on the bottom line of the operator,” van Someren said.

Because the IoT system requires retrofitting, it meant changing the way Austal usually worked with customers.

“The traditional Austal model is we all work really, really hard building a ship down at Henderson, we finish it one day before it's due to be delivered, and then all give it a big thumbs up and wave goodbye as it goes over the horizon,” van Someren said.

“This project is different. We needed a much closer working relationship with our customers. We don't operate vessels - we're a shipbuilder - so if we want to be providing operational advice, we needed to be testing our system out with trial customers.”

The company wound up selecting three operators worldwide, including the Rottnest Express ferry service in Perth, to trial the IoT system.

“What we're trying to do is get the data off the ships - like all good IoT platforms - to do some analysis and generate a product,” van Someren said.

Austal did not say when it anticipated having a production-ready version of the IoT system available.

However, it noted the journey so far had produced some key learnings.

“The first one if anyone is trying to put sensors in a maritime environment, the sea is evil and cannot be trusted,” van Someren said.

“We put a number of different distance sensors as well as some inertial motion units around Rottnest Express but something happens to them between here and Rottnest [Island] that we've never quite been able to understand.

“There was a point during the winter where we just had to stop putting them on. We really underestimated that originally, which is surprising for a sophisticated shipbuilder. But the sensors we put on our ships are traditionally up on the bridge, away from being so close to the waves as the sensors which we've been putting as part of this project.”

The company had also been forced back to the drawing board on its sensing units, in particular to make them more robust to withstand challenges in the field.

“[Our initial] inertial motions unit [was] a horrible combination of different things which we threw together to get this cheap little unit to work,” van Someren said.

“I thought that was a good idea. I thought it would save us money. It was a total disaster.

“We had to manually pull all the components together, it was susceptible to falling apart, and it required some careful love and attention to keep going.

“We've [now] moved away from that. We spent another few hundred dollars to get a solidly-enclosed system which will last probably twice the life of the ship.”

Part of making the sensors and systems around them robust was also a substantial shore-based testing regime.

“The problem that we have found is that every single time we have to pick up the telephone to our customers, to ship operators, and say, ‘Oh, this thing isn't quite working properly, can you give it a kick?’, we're working down through a limited pot of goodwill that we have with them, because they're busy people and their priority is running that ship every single day,” van Someren said.

Van Someren cited an example where Austal had tested a “slightly different” wireless access point to the one it deployed on the ships.

“Those sorts of things have really bitten us so we're getting much more rigorous in our testing,” he said.

The end game for Austal is to create an IoT system that can scale up to a large number of potential users and use cases.

“Austal has built over 300 vessels over the 30 years it has been in existence plus there are many more ships out there which our system is applicable to as well,” van Someren said.

“We want to develop a system which can be scaled, which has the underlying infrastructure including cloud infrastructure, as well as [sensor] hardware, which will be suitable to fit to a very large variety of different ships in the future.

“Ultimately that will provide us with information to design better ships in the future as well.”