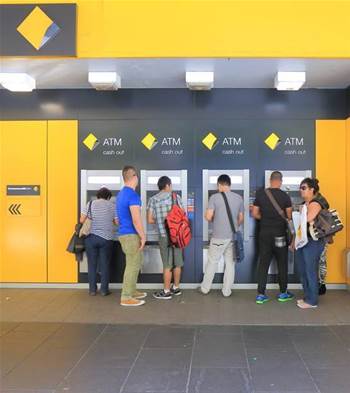 The Commonwealth Bank of Australia’s backflip on its longstanding Apple Pay boycott has paid off in spades, with more than half a million people flocking to the new payment service just two weeks after it was made publicly available to customers.

The stampede of iPhone users is so big it has boosted the CBA’s total number of mobile banking by half, propelling the number from 1 million Android users to a total of 1.5 million total mobile numbers.

The fresh numbers were revealed to investment analysts this week by CBA chief executive Matt Comyn, who credited the bank’s customer engagement platform for the delivering the result, before outlining how robust customer feedback swayed the matter.

The decision to appease customer frustration with CBA’s initial resistance to adopting Apple Pay – which was based on the sizeable clip Apple takes from each transaction – is being paraded as a symbol of the CBA’s ability to listen and respond to customers in the wake of the Royal Commission.

Tin ears are becoming expensive in banking. On Thursday evening NAB chairman Ken Henry and CEP Andrew Thorburn both walked the plank after being singled out for criticism by Royal Commissioner Kenneth Hayne for their industrial deafness to customers.

A major criticism of all banks arising from the Royal Commission’s final report this week is that institutions put pursuit of profits in front of customer welfare and had a tin ear to complaints and deficiencies.

So, as the Great Contrition continues, Comyn held out CBA’s Apple Pay backflip as hard evidence the bank can listen, engage and act in the interests of customers.

The bottom line is CBA is prepared to sacrifice its transaction fee pipeline for customer satisfaction and loyalty.

“I certainly appreciated the more than 14,000 customers who took the time to respond to my letter to more than eight million,” Comyn said.

“There are a number of very clear themes came through that. One of those of course was the demand for Apple Pay, which we announced on 23 January.

“I think it is really critical in terms of setting the tone and the right culture inside the organisation that both myself, members of my Leadership Team are very engaged directly with our customers.”

However Comyn was keen to temper any institutional investor expectations of cultural reform without cost during the half yearly results call, with the CBA’s technology capability about to be sweated hard to reduce internal costs.

A real headwind CBA is facing is that tooling-up for regulatory and compliance requirements – not exactly growth generators – are going to suck cash and human capital out of other projects in the near term.

“We have to make the right trade-offs. Clearly at the moment you see in our disclosures, 64 percent  of our investment is put against regulatory and compliance,” Comyn said.

“That is going to remain elevated. Over time, we would like to be putting more of that investment into both productivity and growth.”

Tech vendors salivating at the prospect of selling big ticket compliance systems into CBA won’t be getting much joy though.

“Clearly, we see the need for incremental rather than large scale CAPEX announcements at this point in time, Comyn said.

There was also a nod to the prescience  of the CBA’s former tech savvy executive – think CIO Michael Harte, CEO and assembler tinkerer Ralph Norris and Volkswagen fan and SI Jedi Dave Curran – in terms of building a banktech machine that could flex with rough seas.

“Every period we will be talking about what we have done in the period that has gone before. We have to of course balance that against an elevation in our risk and compliance spend. As I said I think that is entirely appropriate given the current context,” Comyn said.

“But we recognise that we need to make some absolute structural cost reductions to ensure that the organisation is best positioned for the future. That we are right size in the cost base for undoubtedly a more intensive competitive environment,” Comyn added in a clear reference to being able to stay on the front foot when Open Banking hits.

“That footing extended to “making the right investments for the long term, and [being] able to put real investment into our technology, into our digital and customer experience.”