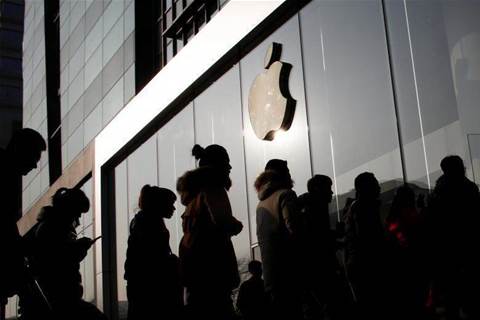 Apple has cut its sales forecast for its latest quarter, with chief executive Tim Cook blaming slowing iPhone sales in China, whose economy has been dragged down by uncertainty around US-China trade relations.

The news sent Apple shares tumbling in after-hours trade and triggered a broader selloff in the stock market.

The revenue cut raises questions about whether Apple, the face of American business in many parts of the world, is being punished by Chinese officials or consumers in favour of local rivals such as Huawei, whose pricey smart phones compete with the iPhone and whose telecommunications equipment US officials are considering banning.

Cook told CNBC that Apple products have not been targeted by the Chinese government, though some consumers may have elected not to buy an iPhone or other Apple device because it is an American company.

“The much larger issue is the slowing of the (Chinese) economy, and then the trade tension that has further pressured it,” Cook said.

Some analysts, however, questioned the impact of Apple’s own actions.

The company forecast US$84 billion in revenue for its fiscal first quarter ended December 29, which is below analysts’ estimate of US$91.5 billion, according to IBES data from Refinitiv. Apple originally forecast revenue of between US$89 billion and US$93 billion.

“While we anticipated some challenges in key emerging markets, we did not foresee the magnitude of the economic deceleration, particularly in Greater China,” Cook said in a letter to investors.

“In fact, most of our revenue shortfall to our guidance, and over 100 percent of our year-over-year worldwide revenue decline, occurred in Greater China across iPhone, Mac and iPad.”

Wednesday was the first time that Apple issued a warning on its revenue guidance ahead of releasing quarterly results since the iPhone was launched in 2007.

Apple shares, which had been halted ahead of the announcement, skidded 7.7 percent in after-hours trade, dragging the company’s market value below $700 billion.

A slew of brokerages reduced their first-quarter production estimates for iPhones after several component makers in November forecast weaker-than-expected sales, leading some market watchers to call the peak for iPhones in several key markets.

On Apple’s earnings call in November, Cook cited slowing growth in emerging markets such as Brazil, India and Russia for the lower-than-anticipated sales estimates for the company’s fiscal first quarter.

But Cook specifically said he “would not put China in that category” of countries with troubled growth.

That all came before the damage to the Chinese economy from trade tensions with the United States became clear.

On Wednesday, China’s central bank magazine said the country’s economic growth could fall below 6.5 percent in the fourth quarter as companies face increased difficulties there.

Apple is now the highest-profile multinational corporation to warn that the economic slowdown in China could hurt its business.

Apple has held firm on its premium pricing strategy in China despite the risk of a slower economy, a factor that has been exacerbated by the strong US dollar.

Apple tends to set its prices in US dollars and charge a broadly equivalent amount in local currencies.

“The question for investors will be the extent to which Apple’s aggressive pricing has exacerbated this situation and what this means for the company’s longer-term pricing power within its iPhone franchise,” James Cordwell, an analyst at Atlantic Equities, told Reuters.

Hal Eddins, chief economist at Apple shareholder Capital Investment Counsel, said Cook’s comments on how the US trade tensions with China were hurting the company’s outlook “might be a dig at (US President Donald) Trump, but mostly he may be using the trade turmoil as an excuse for some missteps they’ve made over the last year.”

Other investors were not immediately alarmed.

In his letter, Cook said Apple has US$130 billion in net cash and that it intends to continue its efforts to reduce that cash balance to net zero, which the company has so far accomplished through dividend increases and share buy backs.

“We would anticipate the company increasing share buybacks on the weakness to return capital to shareholders at discount prices,” said Trip Miller, managing partner at Apple shareholder Gullane Capital Partners.