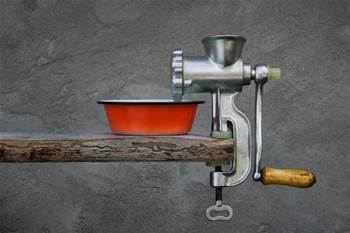 No silly season is complete without a cavalcade of catalogues, be they the most important, least edifying or just straight-out strangest moments of the year.

(And yes, iTnews has its own parade of annual highlights coming very soon, we promise,  so just hang in there folks.)

But when it comes to butchering language, the nation’s qualitative keeper of record for corporate verbal concoction is the respected Plain English Foundation, which has just put out its annual table of “Worst Words” with information technology executives again making a strong showing.

While the tech industry this year narrowly missed out on the ‘worst word or phrase’ top gong – that went to former chairman of the ABC Justin Milne for “external career development opportunity” in reference to efforts to jettison Emma Alberici – propellerheads still took out three prizes from a dirty dozen line-up of meaning manglers.

“They use words like demising, disestablishing or deactivating to avoid saying ‘job loss’, James said, adding that 2018 was “was a particularly poor year for corporate doublespeak and spin.”

Heading up the tech pack was the above Facebook characterisation of clickbait-mongering trolls and bots that held a little social engineering festival in the run up to the US election.

“This mouthful of a phrase is Facebook's euphemism for Russian election-tampering. We're not sure why Facebook needed to make this issue any more opaque than it already is,” James noted.

Then again, in the world of corporate affairs, questions are so often the enemy of progress.

Sniffing is one of those words that so rarely suggests appropriate behavior. So it’s hard to know what possessed Amazon to braze together “Voice Sniffing”.

Still, you’re not a real platform without an AI assisted voice bot like Amazon's Alexa, even if she can’t help overhearing.

Noting that voice sniffing is “also known as eavesdropping” James observes the term came into general use in 2018.

Non-apology of the year

And then there’s Twitter and its awkward gymnastics over conspiracy evangelist Alex Jones.

James reserves a special spot on his annual list for this kind of engineered evasiveness, and this year Jack Dorsey delivered in spades.

“We likely over-rotated on one value, & then let the rules react to rapidly changing circumstances (some we helped create),” Dorsey said in relation to the Jones fiasco.

Still, if 2018 has taught us anything it’s that you really can run a nuclear superpower using Twitter, though it’s particularly elegant or eloquent and can come across as rather shrill.

In other words, we’re looking to set up a nice a little sideline in documenting challenging and downright silly tech terms.

They just have come from either a corporate of government IT shop or rate as first class vendor (or analyst) jibber jabber.

Submissions can be anonymous or you can seek to be credited for your discoveries (just make sure you tell us if you want recognition).

Send your donations of tech-related doozies to:

Or, just use the comments field below.

Give us your best and iTnews will pull together an arbitrary compendium linguistic offal to savour, avoid or upcycle for your next report or corporate presentation.