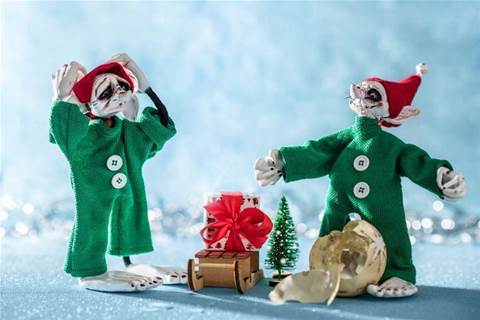 But still something significant going on, despite wonky number.

There’s never a shortage of eager economic eyeballs to how online payments are performing in the run-up to Christmas, after all it’s the ringing of online tils that’s caused chronic tinnitus for bricks and mortar sellers for the past decade.

But when CBA bowled-up a super fresh set of online retail spend numbers for its 2.4 million credit cards on Monday for most of November (1st to 26th), there were a few people scratching their heads when the annual growth rate in transaction value, well, fell off a cliff.

After some stellar growth across 2016 and 2017 (13.1 percent and 18.5 percent respectively) 2018 transactions came down to earth with a rather serious thud at a paltry 1.9 percent, according to the CBA's stats.

For those watching transaction numbers to track the the state of the economy -- it was, as one analyst succinctly put it, what you might call a ‘WTF’ kind of moment; like when the economy stopped last and somehow no-one noticed.

Make no mistake, it takes something big, very, very big to reduce online payments growth at Australia’s biggest bank, cards issuer and electronic payments pump house that much. LIke so big you don’t not notice it. Truth is, it wasn’t really there.

So as sceptical eyebrows went up, logical questions started surfacing.

A couple of analysts familiar with online payments data told iTnews they had second thoughts at first glance and held off feeding it into modelling. Other data in the market just didn’t support CBA’s nosedive.

The early betting was on a whacko figure and speculation quietly mounted as to what the cause might be.

Perhaps CBA left out a state? Nope, still too big a fall.

Accidental decimal point shift? Feasible if you assume the correct figure is 19.0 percent… but then that didn’t tally with a corresponding value of year on year growth in transactional volume that also landed hard at 4.9 percent.

Intrigued and a little confused, iTnews reached for the security blanket of legacy journalism and used a telephone to call a human at the CBA who we won’t name because they were so polite, helpful and pleasant.

To heavily and unfairly paraphrase the conversation, it went along the lines of:

‘Any more info on this number?’
‘That doesn’t sound right, where did you read that?’
‘Your website’
‘Let me take a look… [redacted]’

Turns out the real number is for year-on-year growth in transactional value for CBA’s online retail spending is 11.9 percent. Dang, the old missing number trick (and CBA fixed it as soon as you could blink).

(And yes, we admit like time poor others we were looking only at the statistical table instead cross referencing figures in the text.)

But here's the real story: there is still something going on, even when the right number is in place.  And it could be pretty significant.

Are online transactions – or cards – be headed for a plateau?

The guts of CBA’s trend analysis is that “consumers continue to spend more online in the lead-up to Christmas, but the speed of the growth has moderated.”

It’s hard to say until at least mid-January what the online retail numbers really look like, but by the main consumers are fairly conditioned to getting their gear shipped on time for the big day – think two weeks –so there may not be a big late spike like in bricks and mortar.

That means we aren’t growing online purchases as hard as before, but the value of them (at the checkout anyway) is climbing (thanks again Apple).

Our theory is that online transactions (at least based on the CBA’s retail data) could be bumping up against their natural growth ceiling, or when a transaction type in a market flips from being a challenger to an incumbent.

More late adolescence than maturity, but it's a finite pool after all.

If you widen the lens in the cards and payments arena, there are some telltale signs, especially in ‘card present’ payments that are going digital at a rate of knots.

Think laterally and addition of credit cards to the NSW Opal transit ticketing system combined with the CBA’s backflip on the Apple Pay boycott essentially tells you that consumers want to pay with their phones as default.

It also tells us hesitation and resistance to handset-based transactions has sharply declined (thanks again Apple).

What isn’t abating yet though is the volume or dollar value losses in online card fraud that is nudging $500 million a year.

So when the post-Christmas spending numbers are in, rest assured the RBA will be running the numbers on who’s been naughty or nice.

There really is nothing quite like the gift of regulation.