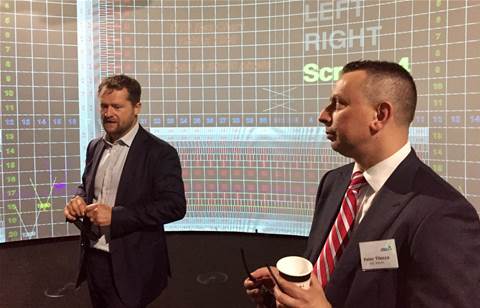 Insurers facing imminent legislative exclusion from ever accessing My Health Record data – de-identified or otherwise – are optimistic policyholders could soon proactively volunteer information on themselves to find the most appropriate coverage at the best price.

But at ANZ Wealth’s underwriting division, the pricing hard heads doing the numbers on risk reckon if the trust battle with the public can be won, there will be improvements for customers and businesses alike.

OK, so it’s a big if… but being able to trust banks and insurers again might be nice. Let's dare to dream for a moment.

Asked whether the exclusion of the insurance sector from access to My Health Record data was a missed opportunity, ANZ’s chief underwriter for wealth operations Peter Tilocca was upfront.

“I can see why it has been excluded at this stage,” Tilocca told iTnews. “Yes, I agree it’s a missed opportunity.

“But I think that as we continue to explore and continue to innovate and the acceptance of the sharing of that kind of data becomes more mainstream down the track, I can see an opportunity for that to change,” Tilocca said, referring to community attitudes towards ring-fencing personal health data.

Tilocca was adamant that “the trust element around that personal data” was still “the biggest issue” when it came to personal health information, like that contained in My Health Record.

To keep the comments in context, Tilocca was speaking at the launch of a revamp of ANZ insurance arm OnePath’s underwriting system, where the institution has partnered with Sydney’s University of Technology’s Advanced Analytics Institute to give researchers and students a crack at solving difficult and complex business problems. More on that project in a moment.

Personal data as an asset

The way Tilocca frames it, consumers are becoming more aware, savvy and astute about the personal data they create and control, and they will knowingly use their data to exercise agency in the market, especially around personalisation and price.

Given the government’s current fixation with applying the data driven ‘open’ model to markets – think open banking, open data –  it’s not such a big conceptual leap to health and life insurance.

Jay Tutt, ANZ Wealth’s head of insurance operations, was similarly confident informed and empowered consumers can, and should, call their own tune.

It comes down to volition, Tutt stressed, and the need for consumer and citizen control.

“It should always be back to the client to make the decision on what data sources you [an organisation] can get access to," Tutt said.

“In our industry there is a fair bit of work going on around that, and how we can make that a lot more transparent to the client.

“If the client is OK with us to access data and they proactively – not reactively – give us access to certain data, that’s where I think [it could work].”

Putting persistent friction trying to satisfy policyholders and shareholders at the same time to one side, Tilocca and Tutt offered a rare glimpse under the hood of risky business.

ANZ’s partnership with UTS is essentially about using cutting edge data science to hammer out some of the rather hairy business problems that would otherwise be too hard to do internally…and maybe cherry picking some grad and PhD talent.

One of the biggest problems underwriters face is the quality of data people provide when applying for cover or a policy. It’s not so much a matter of bad answers to questions, but questions that just need to be asked better.

Fewer questions, phrased and asked better in plain English, can yield major improvements. It may sound simple, but for an industry steeped in traditions of paperwork and covering all bases, even the relatively simple needs to be modelled and tested.

The pain point for insurers is that every time they ask a question people find difficult to understand or answer, more and more staff get involved, adding more and more cost. Cost that eventually gets factored into premiums.

Questions not the enemy of progress

Tilocca is intent on understanding why people don’t understand what’s being asked.

“When people don’t provide the full details for underwriting it’s not because they are lying, it’s because they don’t understand the question exactly – and that’s when at claims stage it could be held up pending further investigation,” Tilocca said.

“[It goes back to] plain language. When people truly understand the question you are asking, they will give you the complete answer. Which means at claim time, it’s a greater experience.”

Put plainly, that means there’s a lot less checking that needs to be done and lot more confidence when a claim is filed or policy is written.

One of the biggest bugbears is the field “other” that appears at the end of drop-down menus or lists. Tick that box and you’ll go straight to a human whether you know it or not.

ANZ prefers that an intuitive machine can bowl up the options you need to tick first serve, rather than people defaulting back to the dreaded ‘other’ option at the bottom of a menu of non-answers.

One truth for OnePath

The output of the UTS advanced analytics project also means that ANZ’s OnePath can automate the checking and audit of how policies are underwritten, a capability that can catch misses humans might make, like adding or deleting and exclusion.

Those are where the nasty surprises and delays at claim time happen, the sort that distress customers and make staff feel bad.

Underwriting audits that used to happen every six months can now happen in real time.

“It’s like having a robot quality assurance person running in the background to make sure all the key elements of decision making have been made by that underwriter,” Tutt said.

“The industry does predominantly manual quality checking, principally underwriters checking other underwriters’ work. You can only get through a percentage of cases using that sort of approach.

“With the risk scoring engine you have got 100 percent of cases. It’s early, early days, but the models are very predictive and what we are doing now is industrialising that,” Tutt said.

It boils down to ironing out problems before they occur, especially when people can be in their most vulnerable, fragile or distressed state; accidents, fire, flood or unexpected bad health.

“You don’t want to be picking up these problems at claim time … because you can’t do anything at claim time,” Tutt added.

It boils down to a fairly simple social contract: for insurers to front up on claims, people need to be upfront on their circumstances.

For Tilocca, the end game for the insurance business is being able to eliminate the clunkiness, paperwork and drudgery now incumbent in insurance processes.

“The endgame in all of this is to give a client a policy in real time,” ANZ’s chief underwriter said. “There’s a long way to get there, but we can use this sort of data to help get there.”