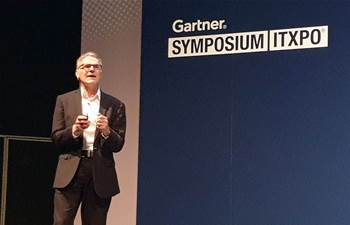 CIO Steve Hodgkinson turns trust from the business into funding.

Victoria’s Department of Health and Human Services has its “digital mojo back” and as a result has been rewarded with an $80m increase in its discretionary IT budget.

CIO Steve Hodgkinson yesterday told the Gartner IT Symposium that the  Department’s  “Platform+Agile” strategy has helped it change from an organisation weighed down by technical debt to one that now has over 100 projects in flight and more than 35 successful system launches behind it over the last four years.

Hodgkinson said the strategy “is founded on the simple and common sense idea that we should use a standardised and well proven platform to build a new application. The platform is reusable from one application to another. It enables us to become more efficient and productive. It makes us faster and reduces the number of variables and unknowns ... and hence reduces risk and cost.”

Azure, Dynamics, Office 365 and  Salesforce are the Department’s key platforms, with a little ServiceNow, SuccessFactors and Oracle on the side.

“Starting with a platform also enable us to be more agile because we can get started quickly (often using in-house teams without doing any procurement because we have already procured the platform) and then implement a solution that we know is secure and will scale,” Hodgkinson said.

“We can quickly implement a minimum viable (I like to say visible) product and then iterate the solution based on user feedback.”

The long haul CIO also said this approach still allows innovation – by using native services from the Department’s chosen platforms, rather than by procuring new tools and then conducting integration projects.

Hodgkinson said these approaches have already been used on the 35 already-delivered projects he’s overseen, and that their success changed the Department’s attitude towards IT.

“None of these projects failed in the way that public sector projects usually fail,” he said. “And they were all done for a small number of millions of dollars.”

“It is not surprising projects don’t fail because we have done it before. We are leveraging, not inventing.”

The success of this approach means that the business “has come to trust us to spend money wisely.” The result was a lift in the IT team’s discretionary budget from $20m to $80m.

“We are seen to be able to deliver new apps,” Hodgkinson said. “We can do that because we start with a platform.” He didn’t say what he plans to do with the increased discretionary budget, but said whatever the Department does will leverage its core platforms.

“The CIO role is not about coming up with smartypants ideas to use technology,” he said. “Don’t do some hyper-risky thing and then worry about integration. Innovation now is a platform play.”