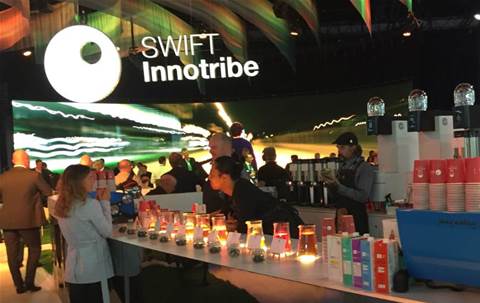 Apple has launched a secretive charm offensive on senior banking and finance executives, as the world’s biggest walled garden tries to patch-up its fractious relationship with institutions still polarised over its rather pricey Apple Pay transaction service.

But it’s a campaign evidently fraught with pitfalls.

The mega-vendor late last week left many bankers confused at the giant SIBOS 2018 finfest in Sydney last week after it jammed a highly exclusive event into the middle of a public exhibition hall.

Curious onlookers and bystanders were chased away from what had been the go-to public space of the event. Known as Innotribe, the space was hastily cleared and then shielded by what looked like the curtain in the Wizard of Oz, with attendees' curiosity soon giving way to, well, annoyance.

To put things in context, SIBOS isn’t your average trade event, even if 7000 people rock-up from around the world. It's more like money central, and Apple seems to be is discovering it needs to go to the banks instead of the banks coming to it.

Put on by SWIFT, SIBOS has been a global fixture for the top echelon of the financial services sector for 40 years. Its food hall features table service, crisp white linen, an a-la-carte menu, top shelf wine selection and hallmarked cutlery.

It’s a highly discerning crowd that, more often than not, flies at the pointy-end of the plane and has car-with-driver service thrown in with the hotel room.

And Apple’s secret presentation to the world banking community at SIBOS would have perhaps  gone undocumented had it been held in one of the Sydney International Convention Centre’s many and well-utilised private areas.

But, Apple being Apple, instead commandeered the entire “Innotribe” lounge and presentation area where thousands of conference goers had been flocking to for a seriously good  -- and very open -- selection of coffee, tea and gourmet snacks.

This was the comfort area where people decompressed and un-blockchained. At the end of SIBOS day four, to counter the return jet lag, it was where you could get away with a quiet and non-judgemental power nap.

And then, without forewarning, the favourite place of the show disappeared behind what was quickly dubbed the Great Wall of Cupertino.

To keep unintentional snoopers out – again, we’re talking folk accustomed to SIBOS’ renowned free-range and very comfy conference style – security guards appeared at the entry to the great Apple show after a giant blue curtain was drawn around the open-air area.

Apple’s commitment to privacy is well known; the only problem with using a massive piece of fabric around a big, flashy and loud AV presentation is that it instantly attracts the attention of everyone around.

And so, as the blare emanated, displaced onlookers genuinely wanted to know what was going on. Especially when surrounding presentations were drowned out.

Which is when Apple's almost secret dog-and-pony show for banks started to get, well, rather awkward.

With no overt announcement, or even a sign at the entrance to say what was going on, confused bystanders thinking they might be missing something important found themselves embarrassingly rebuffed and excluded.

People found hovering outside, especially within earshot were, uncharacteristically, firmly moved along. For bankers used to highly personal service, it was not a comfortable fit at all. And it showed.

Then, for a dash of extra-awkward confusion, even the listing of the not-very-stealth Apple pop-up event tried to go deep undercover on SIBOS’ website, but failed.

Google’s cache tells us the event was originally listed by SIBOS as “Apple: Company values in action” and carried no reference to it being invite-only or closed to the press.

The speakers were listed as Todd Schofield, Apple’s worldwide financial services lead and Duena Blomstrom, the founder of “Emotional Banking” and “an independent Digital and CX consultant” plus a bunch of other stuff.

Apple’s event description, including its yanked invite, offers one clue about why there's an urgent need to keep things hush hush: it's a muddle. Note the use of the word power.

“From Privacy to Accessibility, Apple’s values are the core of how it does business. At Apple, we believe privacy is a fundamental human right and our products are designed to protect your privacy. Technology is also most powerful when it empowers everyone and we build powerful assistive features into Apple products to give people with physical limitations greater control over their lives. Join Apple for an overview of its values and how they are reflected in the company’s approach, operations and engagement with Financial Services institutions.”

Or, you know, maybe just show up and get turned away. Apple can do that kind of privacy too.

Then again, if you’re a finance executive, you might have prefered getting uninvited by Apple from an alias event, like one in exactly the same place, at the same time as its delisted company values shindig, courtesy of a hastily redirected URL.

The alias event is billed as “Enterprise Mobility in financial services”. It also features someone called Todd Schofield, though he’s not listed as belonging Apple or indeed to any company. But there is a picture of him. That face ID thing must work a treat.

“We don’t have a full description of this speaker yet” SIBOS’ speaker page notes, augmenting the Apple's trademark mystique and protecting Todd's privacy.

Which all rather begs the question of what did Apple actually share with its ultra-exclusive list of A-list bankerati?

What’s not a secret is, by most accounts, not really much at all.

The art of saying nothing

Attendees leaving the presentation, some early, were plainly underwhelmed. Discretion is the order of the day at SIBOS, so we’ll keep the delegates’ names out of it.

A gaggle of ANZ bank staff were observed departing the Curtain of Cupertino. Those employed by the only Australian Big Four bank to offer Apple Pay flatly refused to comment, albeit with good grace and good humour.

Others were less generous.

A gentleman from Switzerland seemed less impressed and described the Apple event as one giant stage managed ad and said it revolved around Apple talking about how good it was, how good its privacy is, and how nice its products are.

Our Geneva-based source added it appeared all the mystery and conspicuous exclusion had been engineered to create a buzz that was let down by a, well, an hour long ad.

“Apparantly I can also do some banking on my iPad and you can use an iPad in a bank,” the gentleman drolly said. "Great."

Asked if new products, services or apps had been launched, delegates fairly uniformly recounted they’d been subjected to a rather lengthy infomercial.

“And they are expensive and quite arrogant. I think too expensive. I don’t see a change. We will see”.