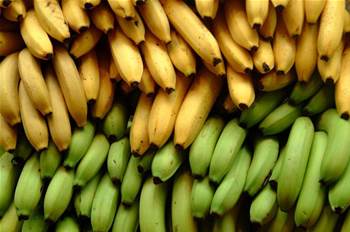 Easier to drive into town with a USB stick and upload data there.

Western Australia’s Sweeter Banana Co-operative says its staff are “many” times forced to drive to the nearest town to upload data or access websites due to its own “incredibly slow” and unreliable NBN Sky Muster connection.

The co-operative, which has a turnover of between $5 million and $10 million a year, said it sits in the Carnarvon horticultural district, which is between five and 15km from Carnarvon in NW Western Australia and is home to 180 family-run farms.

Although Carnarvon residents received fibre-to-the-node, those in the horticulture district has been given Sky Muster, and the co-op didn’t hold back when it came to describing the service.

“The problem is so bad that our banking websites will not load at times. On many occasions we choose to drive into town (10 minutes away) to access the internet because it is quicker than waiting for the computer to load a website.

“We [also] upload our production data to our intranet every day, so our growers can see their production, quality and market returns.

“Sometimes it is easier to take the data on a USB, drive to town and then upload it. This is a ridiculous situation in the digital age.”

Mangili said that Sky Muster’s performance posed problems for agricultural organisations and families since the farms had to communicate electronically with supply chain partners, such as major supermarkets.

“Our staff cannot do their jobs when they cannot access high speed internet.”

Mangili said there was “no alternative internet service” in the district because it was in an unaddressed mobile blackspot.

“We have tried to rectify this by purchasing an additional 3G mobile service with Telstra, and an approved Telstra antenna on the roof of our shed,” Mangili said.

“This is also unreliable as well as an additional expense, but a necessity because of the lack of reliability of the NBN service.”

Mangili said that the area’s farms were ready to take up new technology but were being thwarted by internet connectivity.

“The horticultural district is now in a data desert thanks to the decision by NBN Co to provide only satellite service,” Mangili said.

“As we move into smart farming, and the potential for drone based/satellite technology to provide real data, enabling farmers to make better decisions, we may find Carnarvon is left behind as other areas move ahead.”