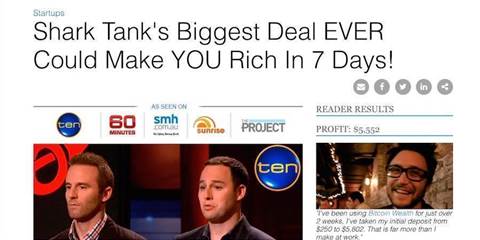 The Australian Competition and Consumer Commission has called on Facebook, Instagram and Google to improve the speed at which they take down advertisements for scams.

The Commission (ACCC) made the call after finding a 400 percent increase in reports of scams that “often appear as online advertisements or promotional stories on social media or a seemingly legitimate, trustworthy website” and include a fake celebrity endorsement.

Such ads, the ACCC says, “include fictitious quotes and doctored or out-of-context images of the celebrity, such as presenters from the TV show Shark Tank, promoting a product such as skin care creams, weight loss pills, or investment schemes.”

The scams offer a free trial of a product but require consumers to provide credit card details and sign up to “an automatically renewing subscription that is difficult to cancel.”

Consumers who fall for the scams find it difficult to stop payments, hence the increase in complaints.

ACCC Deputy Chair Delia Rickard said “most of the reports to Scamwatch involve these scam advertisements running on Google ad banners or as ads in Facebook news feeds. These tech giants must do more to quickly suspend ads,” she added, in order to protect consumers.

Social media giants insist that they work hard to prevent fraudulent advertising, but cannot control all players in the complex networks of programmatic buyers and sellers.

Yet the ACCC calling for action is notable, because social networks are already under pressure to curb fake news, cough up users’ communications and improve their child protection efforts.The latter has seen the federal government create the office of the eSafety Commission, which operates under legislation that compels large social networks to liaise with government on complaints.

Stronger regulation has emerged elsewhere: in Germany, social networks are required to take down hate speech in very short order.

The ACCC’s statement did not suggest it will seek a regulatory response to the problem of scam ads. But the agency did note that reports from scam victims are rising quickly.

It also named the following celebs as often appearing in scam ads: