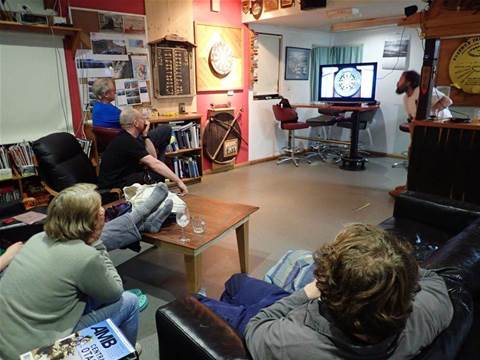 Australia’s Antarctic bases have put their satellite data links to work for a real-time broadcast an inter-base game of darts.

Trupp wrote that in years past the game would play out over radio, with each base telling their remote peers about scores.

This year, “Modern day technology was enabled so that next to the dart playing area a large TV displayed the view from the other station’s camera plus sound, all in real time.”

Making this easier was a recent upgrade to some of Australia’s Antarctic bases: as we reported in 2010, most of the bases made do with connections of a few hundred kilobits a second. In 2013 your correspondent reported 1Mbps speeds at Davis Station. It's harder to find reports of speeds at other Stations, but Mawson base revealed its speed increased by a factor of ten in January 2018.

This competition spanned Macquarie Island, Mawson Station, Casey Station and Davis Station in a competition that spanned multiple timezones. Trupp said he and his Macquarie colleagues “played after dinner on Fridays” which meant their opponents at Mawson base played at lunchtime. Other bases played at convenient times.

The Macquarie Island crew managed to defeat Mawson, which Trupp said led to “cheering and singing. Smiles all round, we must do this again!”